So often, we don’t realize what our parents did for us until they are gone. It isn’t the big, notable things that hit us that way, but rather the subtle things they did. And when you think about it, you realize that it was the subtle things that mattered the most. My dad was the kind of person who held himself to a standard all his life. It was a standard that he imposed on himself. It involved things like kindness, decency, morality, and honesty. Dad was a gentleman, and you always knew he would be. You could count on it, even when you felt that it wasn’t warranted or deserved by the receiver. That’s just how Dad was. He chose to be kind and understanding even when the receiver should have been chewed out without mercy. I know this is all true, because I have been on the receiving end of his acts of kindness, and I have been told that I needed to act that way toward others…which wasn’t something that usually excited me much. It rubbed me the wrong way to give mercy for injustice, but through the years Dad’s lessons soaked in a little, and I think I do find it easier now to be forgiving, whether people deserve it or not. I can tell you, however, the journey to that place has not always been without a few rocky places in the road. Nevertheless, my dad mellowed my temper with his ways, and while I’m not as successful at the mercy for injustice thing, I try to follow his example to this day.

One thing about my dad that has always stayed in my head, and I’m quite certain that is because he had to pound it in there, is forgiveness. Dad was one to say that you should “never let the sun go down on your wrath” and he took that very literally. We were allowed to argue with each other pretty much to our hearts content, provided it didn’t get to the point of driving our parents insane. We were even allowed to argue, or as I called it, debate with our parents to a degree…one which my sisters will tell you, I took much further than they ever dared. No matter how the fight ended, you always knew that at some point Dad was going to come to you and say that you had to make up with your sister or mom. You didn’t have to say the other was right…just that you loved them too much to let those differences of opinion come between you and carry into the next day. And, Dad held himself to that same standard. It never failed. After he finally got done with my…debating…and finally told me that was enough…and I knew it was, too, he would still come to me after he had cooled down, and told me that he loved me and didn’t want us to “let the sun go down on our wrath” so we needed to make up. It was very comforting to know that no matter what you did, or how mad it made him, before the day was over, things would be ok again, and always before bedtime. That is something that has stayed with me all my life, although I can’t say that I have been as perfect at it as my dad was. It is a process, and you just have to work at it. No one is perfect at policing themselves all the time.

The lessons my dad taught to his girls, are what have formed us into the people we are today. And yes, my mom taught us many lessons over the years too that have stayed with us throughout our lives, but that is a story for another day. When I think of my dad, I see a soft spoken man, who never promoted himself, but rather lifted up those around him. He was a man who assured you that everything was going to be ok. You knew that no matter what the problem was, Dad would always love you. You couldn’t do anything bad enough to change that. To him, that was just being a dad. And that knowledge has made all the difference. If Dad were still with us, he would be 89 years old today. Happy birthday in Heaven Dad. While we miss you terribly, we are so thankful that we know where you are, and that you are having the time of your life. We will see you again someday. We love you more than words can ever express.

Lessons From My Dad 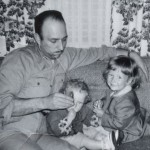 We seldom think about what our parents are teaching us until they are gone. Then the lessons come back to mind in floods, bittersweet with regret, because they are gone. The lessons from my dad that I find the most important, are the ones of caring and compassion. My dad was a very forgiving and understanding man, something I am not always able to be, but a goal that I have put in front of myself.

Dad was a problem solver. He had a way of making you feel like everything was going to be ok. No matter what the problem was, Dad could fix it. I can still hear him saying, “Here is what we are going to do.” He always had the answers, and I always knew he could fix anything. Maybe that statement isn’t exactly true, but in my mind it always will be, and I keenly miss that feeling of perfectness my world had those days. Now, there are times that everything is wrong in my world. There is an emptiness I can’t fill, a pain I can’t stop, and loneliness that lives in my core.

You see, my dad and I thought quite a bit alike, and while we did have a tendency to debate many subjects, it was mostly in good fun. I did always know when enough was enough though, because Dad would say, “Don’t argue with me.” Well, that was the point when he was done with our little debate, and I…well, I knew it. It’s funny because my sisters could never believe that I lived through those years. Whenever my dad and I argued, they were sure that I was about to get the “death sentence” because they would never have dared to argue with Dad like that, but I just knew that Dad didn’t mind a good debate, and even relished them to a big degree.

One of the greatest lessons Dad taught us was to live life to the fullest. He loved this great country, and made sure we saw a whole lot of it. When my grade school teachers asked what we did on our summer vacations, I always had an interesting place to tell about. Dad and Mom took us so many places, and we were truly blessed in that. We learned a lot about this great country. My cousin said of my dad after bringing Dad’s brother, his dad, for a visit and looking at all our travel pictures…”Man, he really lived.” And he was so right. Dad really…really lived!! 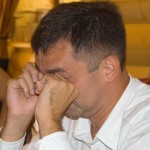 Have you ever wished you could go back and change the mistakes of the past? We all have, of course, but we can’t. Even if we go to the person and ask forgiveness, it doesn’t change the past. People can’t forget what you did, or who you were, even if you change into someone wonderful…nor can you. You will always have to live with the mistakes of your past. You can never go back and change the things you regret. That moment is gone forever, and we are left with one thing…regret.

All around us people are saying you should be able to say or do whatever you want. It’s a free country, right? And the reality is that they are right…it is a free country, but there are consequences for your actions, good or bad. So someone made you mad. You feel slighted. And now, you are going to get even, right? Be careful because “getting even” has it’s price and it is called…regret.

Why is it so important that we get even with other people? Why is it always someone elses job to be there when needed? Why…because we have become a people whose only priority is self. We think, “I’m busy. I am important. I have things to do. I refuse to put up with that. I can say whatever I want to. I can do whatever I want to.” And the list goes on. The reality is that, while we can do all of the above, all too often these actions will ultimately leave us with one thing…regret.

So the next time you feel like being selfish and want to say or do something that you might regret, remember that you will have many opportunities to say or do the mean thing you are thinking about, but only one chance to stop the cycle of…regret.