The Fate Of Flight 19 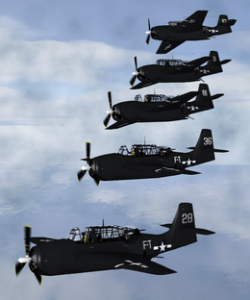 The morning of December 6, 1945 found the United States Navy desperately searching the area known as the Bermuda Triangle for a group of planes. Flight 19 was a routine navigation and combat training exercise in TBM-type aircraft. The group had set out on December 5, 1945 at 2:10pm from Fort Lauderdale Naval Air Station. Their training would take them due east toward the Bermuda Triangle. Much mystery has surrounded the Bermuda Triangle, with ship and planes alike reporting navigation problems in the area, and some disappearing forever. I don’t exactly know what I believe about the Bermuda Triangle, but it is my opinion that there is a logical explanation for the events that have taken place there. Still, many of the lost planes and ship were never heard from again, and never located, so I don’t know.

Flight 19 consisted of five TBM Avenger torpedo bombers, all of which disappeared on December 5, 1945, during the overwater navigation training flight from Naval Air Station Fort Lauderdale, Florida. In all, 14 airmen on the flight were lost, as were all 13 crew members of a PBM Mariner flying boat that was searching for the planes. It is assumed by professional investigators to have exploded in mid-air. Navy investigators could not determine the cause of the loss of Flight 19, but said the aircraft may have become disoriented and ditched in rough seas after running out of fuel. While that is logical, no debris was ever found, nor were the planes ever located, although some think they know where the planes are these days.

The assignment was called “Navigation problem No. 1,” which seems ironic in retrospect. The name was given before the planes experienced problems. “Navigation problem No. 1” was a combination of bombing and navigation, which other flights had completed or were scheduled to undertake that day. The leader for Flight 19 was United States Navy Lieutenant Charles Carroll Taylor who had about 2,500 flying hours, mostly in aircraft of this type, while his trainee pilots had 300 total, and 60 flight hours in the Avenger. Taylor had recently arrived from Naval Air Station Miami where he had also been a VTB instructor. The student pilots had recently completed other training missions in the area where the flight was to take place. They were United States Marine Captains Edward Joseph Powers and George William Stivers, United States Marine Second Lieutenant Forrest James Gerber and United States Navy Ensign Joseph Tipton Bossi. The callsigns for the flight started with ‘Fox Tair,’ or FT and the plane number.

Each aircraft was fully fueled, and during pre-flight checks it was discovered they were all missing clocks. Navigation of the route was intended to teach dead reckoning principles, which involved calculating among other things elapsed time. I suppose that if trained, a person could do that, but I don’t think I could. The apparent lack of timekeeping equipment was not a cause for concern as it was assumed each man had his own watch. Takeoff was scheduled for 13:45 local military time, but the late arrival of Taylor delayed departure until 14:10. The weather at NAS Fort Lauderdale was described as “favorable, sea state moderate to rough.” Taylor was supervising the mission, and a trainee pilot had the role of leader out front. 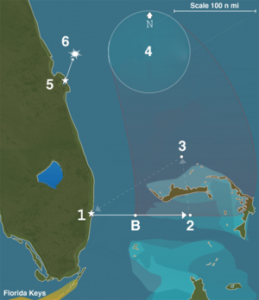 This exercise was called “Naval Air Station, Fort Lauderdale, Florida, navigation problem No. 1,” and involved three different legs. There should have actually been four flown. After take off, the planes flew on heading 091°, which is almost due east for 56 nautical miles, until they reached Hen and Chickens Shoals where low level bombing practice was carried out. The flight was to continue on that heading for another 67 nautical miles before turning onto a course of 346° for 73 nautical miles, in the process over-flying Grand Bahama island. The next scheduled turn was to a heading of 241° to fly 120 nautical miles at the end of which the exercise was completed and the Avengers turned left to return to NAS Fort Lauderdale.

Radio conversations between the pilots were overheard by base and other aircraft in the area. The practice bombing operation was carried out because at about 15:00 a pilot requested and was given permission to drop his last bomb. Forty minutes later thins began to go wrong, when another flight instructor, Lieutenant Robert F. Cox in FT-74, forming up with his group of students for the same mission, received an unidentified transmission. An unidentified crew member asked Powers, one of the students, for his compass reading. Powers replied: “I don’t know where we are. We must have got lost after that last turn.” Cox then transmitted; “This is FT-74, plane or boat calling ‘Powers’ please identify yourself so someone can help you.” The response after a few moments was a request from the others in the flight for suggestions. FT-74 tried again and a man identified as FT-28 (Taylor) came on. “FT-28, this is FT-74, what is your trouble?” “Both of my compasses are out”, Taylor replied, “and I am trying to find Fort Lauderdale, Florida. I am over land but it’s broken. I am sure I’m in the Keys but I don’t know how far down and I don’t know how to get to Fort Lauderdale.” As the weather deteriorated, radio contact became intermittent, and it was believed that the five aircraft were actually by that time more than 200 nautical miles out to sea east of the Florida peninsula. Taylor radioed “We’ll fly 270 degrees west until landfall or running out of gas.” The last known location of Flight 19 was 75 miles northeast of Cocoa, Florida.

Had Flight 19 actually been where Taylor believed it to be, landfall with the Florida coastline would have been reached in a matter of 10 to 20 minutes or less, depending on how far down they were. However, a later reconstruction of the incident showed that the islands visible to Taylor were probably the Bahamas, well northeast of the Keys, and that Flight 19 was exactly where it should have been. The board of investigation found that because of his belief that he was on a base course toward Florida, Taylor actually guided the flight further northeast and out to sea. The only problem I have with that idea is that they never found any debris, and never located the planes. Had they crashed into the ocean, they should have shown up somewhere.

In 1986, the wreckage of an Avenger was found off the Florida coast during the search for the wreckage of the Space Shuttle Challenger. Aviation archaeologist Jon Myhre raised the wreck from the ocean floor in 1990. He was convinced it was one of the missing planes, but positive identification could not be made. In 1991, the wreckage of five Avengers was discovered off the coast of Florida, but engine serial numbers revealed they 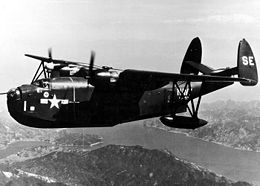 were not Flight 19. They had crashed on five different days all within 1.5 miles of each other. Records revealed that the various discovered aircraft, including the group of five, were declared either unfit for maintenance/repair or obsolete, and were simply disposed of at sea. Records also showed training accidents between 1942 and 1945 accounted for the loss of 95 aviation personnel from NAS Fort Lauderdale. In 1992, another expedition located scattered debris on the ocean floor, but nothing could be identified. In the last decade, searchers have been expanding their area to include farther east, into the Atlantic Ocean, but the remains of Flight 19 have still never been confirmed found.