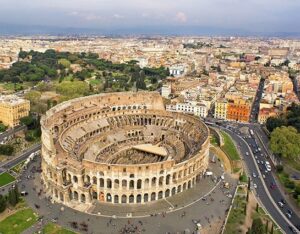 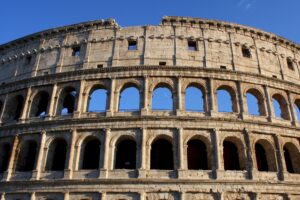 If you visit the Colosseum in Rome these days, you will see a rough-looking shadow of its former glory. The Colosseum was built between 70 AD and 80 AD, under Emperors Vespasian, Titus, and Domitian, the Flavian Emperors. The original name of the Colosseum was the Amphitheatrum Flavium, or the Flavian Amphitheater. Viewed as a populist undertaking by Vespasian, the Colosseum was, at least in part, commissioned as a means to regain the favor of the people, who were restless and unhappy with the imperial institution after Nero’s reign. Planning began in 70 AD and construction in 72 AD. The site of the artificial lake that Nero had constructed as part of the Domus Aurea was chosen for the Colosseum.

Most of the labor for the construction of the building was provided by Jewish slaves, who had been taken as prisoners following the first Jewish-Roman war. The Colosseum was constructed of several materials, mainly travertine, limestone, and marble for decorations. They used tuff, volcanic rock, brick, and lime for links. Metals, mainly bronze, were used to bind the stones together. Travertine is a sedimentary limestone, that is found where rivers, springs, lakes used to exist. Beige in color, travertine typically forms in hot springs. The area around Rome is rich with travertine. It forms by the precipitation of calcium carbonate. The travertine that was used to build the Colosseum came from the town of Bagni di Tivoli, formerly Tibur. Travertine is the majority of the stone in the Colosseum, and most of what is left.

The Colosseum’s decorations were in mostly made of marble, but if you go to the Colosseum today, you will not find much of that marble. It has all but disappeared, because it has been reused in the construction of other buildings in Rome. I find that fact to be very strange, since the Colosseum would have been seen as an important center in Rome…or maybe that is just what it is today. The entrances of the cavea and the balustrades were decorated with marble pieces as well. The first 3 rows of seating were also made of marble, a luxury reserved for the most affluent social class. The columns on the outside had marble capitals, and some columns were also in marble.

Of course, metal was needed too. They had to be able to attach the marble to the structure. In the Colosseum, bronze was the primary metal used, but they also used iron. The metal, was heated and stretched into a bar, then curved into a U shape. Adapted to holes intentionally dug into the stones of the facade, these structures served as agraphs to help keep the Colosseum upright. The first fires got the better of these agraphs which were gradually recovered to be melted. Nowadays only the holes in the stones remain, vestiges of this originality in the construction.

The Colosseum was originally clad entirely in marble. When you visit or see the Colosseum these days you’ll notice how the stone exterior appears to be covered in pockmarks all across its surface. Some say that it was not the reusing of the marble in other buildings that brought the Colosseum to it’s current pockmarked state, 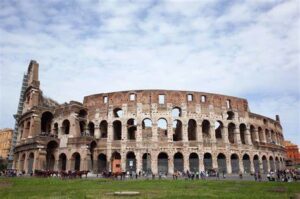 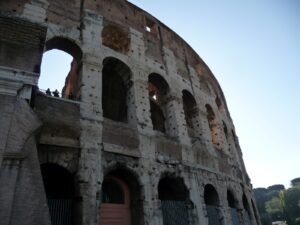 but rather that after the fall of Rome, the city was looted and pillaged by the Goths. They took all of the marble from the Colosseum, and stripped it down to its bare stone setting. Whatever really happened, or even if it was a combination of the two, the Colosseum that stands today looks like a war-torn, broken-down shadow of what it used to be, and yet the fact that it still stands, continues to draw many people from all over the world to visit it every year.