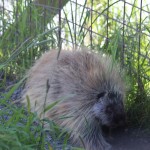 While on our vacation in Alaska, Bob and I had the opportunity to get fairly close to a porcupine…safely, since he was in a fenced area. Porcupines are not really an animal you get to see very often, so it was quite interesting. I do have to say that while this particular porcupine is really quite famous from being in several movies and such, he does, nevertheless, smell very bad, as I’m sure most of them do. That said, I find it hard to understand why any dog would want to attempt to take on a porcupine, but they do, and with devastating results.

Nevertheless, a dog that my husband, Bob’s family had in 1974 decided to do just that when a porcupine wandered into the yard one day. Dogs are curious and territorial, so anything that dares to wander into their domain is usually treated with much hostility…no matter what the 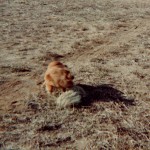 personal cost is. I can’t even begin to guess how many dogs have had encounters with porcupines, or skunks…much to their dismay later. Animals just don’t think about the consequences, unlike humans, who will quickly run the other direction when they see a skunk. And. dogs seem to be the world class leader when it comes to sticking their nose someplace where it is bound to get them in trouble.

A dog meeting up with a skunk can be a really bad thing for his social life, but a dog meeting up with a porcupine can be extremely painful, so if it has to be one way or the other, I guess I would prefer skunk, if it were my dog. But, since you can’t really control everything that goes on in the animal world, I’m sure there will be other encounters with both porcupines and skunks. I don’t think there are very many animals that win against a skunk or a porcupine. Unfortunately, they seem to be a fairly formidable opponent. 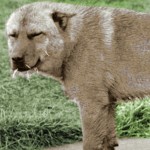 Needless to say, the family dog in this situation most likely ended up getting a smack on the nose with those razor sharp porcupine quills, and if he was smart, he probably learned a lesson that he didn’t quickly forget. Just because it looks smaller than you are, doesn’t mean that you can take it in a fight. It’s always best to know your opponent before you step into the ring. Porcupines don’t tend to just come up and attack you. They will wait until they feel that the threat is big enough that they have to fight for their survival before they take action. This particular porcupine appears to me to be trying to walk away, but the dog seems to have decided that he can take this opponent. My guess…It was a very bad day for that dog, because it’s never a good thing when dog meets porcupine.