World War II saw many changes in how women were viewed in the normally male-dominated world. With so many men off fighting the war, the women stepped up to do the jobs of riveters in the shipyards, and they stepped up in many other occupations too. If there are no men to do the jobs, someone had to keep the country running, and the United States found out that women were up for the task. I don’t suppose that everyone thought that women could do it, but they simply had no choice. World War II was the largest and most violent armed conflict in the history of mankind. This war taught us, not only about the profession of arms, but also about military preparedness, global strategy, and combined operations in the coalition war against fascism.

Prior 1942, the only way for women to be involved in the service was as an Army Nurse, in the Army Nurse Corps, but early in 1941 Congresswoman Edith Nourse Rogers of Massachusetts met with General George C. Marshall, the Army’s Chief of Staff, and told him that she intended to introduce a bill to establish an Army women’s corps, separate and distinct from the existing Army Nurse Corps. Congress approved that bill on May 14, 1942, and the Women’s Army Auxiliary Corps (WAAC) was born. The WAAC bill became law on May 15, 1942. Congressional opposition to the bill centered around southern congressmen. With women in the armed services, one representative asked, “Who will then do the cooking, the washing, the mending, the humble homey tasks to which every woman has devoted herself; who will nurture the children?” These days he would have been run out of Congress for having backward ideas but it was a different time, and one that some women of today truly miss…especially young mothers.

After a long and bitter debate which filled ninety-eight columns in the Congressional Record, the bill finally passed the House 249 to 86. The Senate approved the bill 38 to 27 on May 14. When President Franklin D. Roosevelt signed the bill into law the next day, he set a recruitment goal of 25,000 for the first year. WAAC recruitment topped that goal by November of 1942, at which point Secretary of War Henry L. Stimson authorized WAAC enrollment at 150,000, the original ceiling set by Congress. The day the bill became law, Stimson appointed Oveta Culp Hobby as Director of the WAAC. As chief of the Women’s Interest Section in the Public Relations Bureau at the War Department, Hobby had helped shepherd the WAAC bill through Congress. She had impressed both the media and the public when she testified in favor of the WAAC bill in January. In the words of the Washington Times Herald, “Mrs. Hobby has proved that a competent, efficient woman who works longer days than the sun does not need to look like the popular idea of a competent, efficient woman.” Women would go on to not only become competent and efficient, but requested…sometimes above the men!!

So, what led to the Army’s decision to enlist women during World War II? The answer is simple. The “unfathomable” became reality, as the Army struggled to fulfill wartime quotas from an ever-shrinking pool of candidates. By mid-1943, the Army was simply running out of eligible white men to enlist. The Army could scarcely spare those men already in the service for non-combatant duties. General Dwight D. Eisenhower remarked: “The simple headquarters of a Grant or Lee were gone forever. An Army of filing clerks, stenographers, office managers, telephone operators, and chauffeurs had become essential, and it was scarcely

less than criminal to recruit these from needed manpower when great numbers of highly qualified women were available.” While women played a vital role in the success of World War II, their admission into combat roles would not come for many years, and many weren’t sure it was a good idea when it did. The WAC, as a branch of the service, was disbanded in 1978 and all female units were integrated with male units. 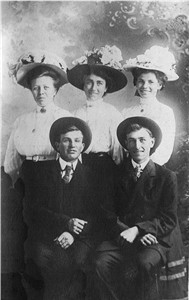