Lessons From My Grandmother 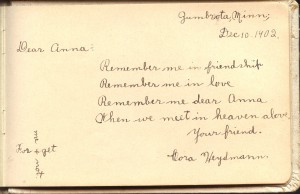 I never really had the chance to know my dad’s mom, because she died when I was just a little over 2 months old, but looking through an old autograph book that belonged to her, I found…between the lines written there…a few lessons passed down to me from her. They were lessons taught by the girl she was, to the granddaughter she only briefly knew. It’s funny the things you can learn from words that the teacher didn’t even write. I think that might be because the things that people say or write to you show to a degree the type of person you are. People naturally don’t want to hurt the feelings of their friends, so they try to agree with their friend’s beliefs, or they are careful around them. That was the kind of person my grandmother was. People respected her and wanted to live up to her standards. I like that. Oh, I know that those people might have just said that because it was her, and not meant a word, and I know that many of the autographs were the poetry of that day, and this, in some cases, but it seemed important that she like them and respect them.

One of the things I know about my grandmother from hearing about her all my life is that she was a hard working woman. My grandfather worked for the railroad, and he was away much of the time. That left the running of the farm and the everyday life of the kids to her. She never even flinched. She saw what needed to be done, and she did it. She showed her children the way they should do things, and they all turned into respectable and responsible people. Of course, I realize that the way kids turn out is not totally up to their

parents, because the influences of the world are there too, but much of what they learn and live, at least when they are young, is from their parents.

As her birthday approaches on August 3rd, it occurs to me that she would have been 126 years old…impossible I know, but it tells me that the lessons of my grandmother really never become out dated. If we stand by our values, and let others know that we stand by our values, they will respect us and our values. If we compromise our values, others will know that we are fake. My grandmother was not fake. She was the kind of person that people wanted to be like. That is a great honor. And her friends felt honored to know her.