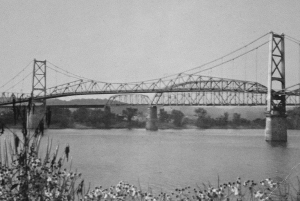 The Silver Bridge, over the Ohio River, was an eyebar-chain suspension bridge built in 1928 and named for the color of its aluminum paint. In structural engineering and construction, an eyebar is a straight bar, usually made of metal, with a hole or “eye” at each end for fixing to other components on the structure. Eyebars are used in structures such as bridges, in settings in which only tension, and never compression, is applied. Also referred to as “pin – and eyebar construction” in instances where pins are being used. The Silver Bridge carried US Route 35 over the Ohio River, connecting Point Pleasant, West Virginia, and Gallipolis, Ohio.

The problem with the original form of this structural engineering is that as it rusted or corroded, the eyebar-chain was weakened. It wasn’t an obvious weakening, and often presented in the form of a small crack. On December 15, 1967, the Silver Bridge collapsed under the weight of rush-hour traffic, resulting in the deaths of 46 people. Two of the victims were never found. In the ensuing investigation of the wreckage, it appeared that the cause of the collapse was the failure of a single eyebar in a suspension chain, due to a small defect that was just 0.1 inches deep. Analysis showed that the bridge was carrying much heavier loads than it had originally been designed for and had been poorly maintained.

The eyebars in the Silver Bridge were not redundant, as links were composed of only two bars each, of high-strength steel (more than twice the tensile strength of common mild steel), rather than a thick stack of thinner 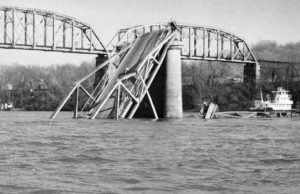 bars of modest material strength “combed” together, as is usual for redundancy. With only two bars, the failure of one could impose excessive loading on the second, causing total failure…which would be unlikely if more bars were used. While a low-redundancy chain can be engineered to the design requirements, the safety is completely dependent upon correct, high-quality manufacturing, assembly, and maintenance. The bridge failure was due to a defect in a single link, eye-bar 330, on the north of the Ohio subsidiary chain, the first link below the top of the Ohio tower. A small crack was formed through fretting wear at the bearing, and grew through internal corrosion, a problem known as stress corrosion cracking.

The towers were “rocker” towers…a common European design, which allowed the bridge to respond to various live loads by a slight tipping of the supporting towers, which were parted at the deck level, rather than passing the suspension chain over a lubricated or tipping saddle, or by stressing the towers in bending. The towers required the chain on both sides for their support. A failure of any one link on either side, in any of the three chain spans, would result in the complete failure of the entire bridge. So many components that can so easily bring down a bridge…and no one knew.

At the time the Silver Bridge was built, a typical family automobile was the Ford Model T…weighing in at about 1,500 pounds. The maximum permitted truck gross weight was about 20,000 pounds. By contrast, at the time of the collapse, a typical family automobile weighed about 4,000 pounds and the large truck limit was 60,000 pounds or more. Bumper-to-bumper traffic jams on the bridge were also much more common, meaning that 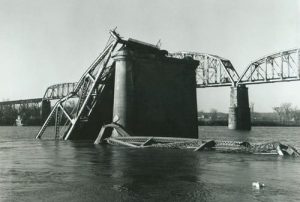 during rush hour…several times a day, five days each week…there was significantly more stress on the bridge elements. The whole situation was a recipe for disaster, and that is exactly what happened on December 15, 1967. After the collapse, and the subsequent replacement of the Silver Bridge in 1969, a scale model of the original bridge was on display at the Point Pleasant River Museum. An archive of literature about the bridge was also kept there for public inspection. On the lower ground floor, the museum displayed an eyebar assembly from the original bridge. The museum closed July 1, 2018 due to significant fire damage. The future of the Silver Bridge exhibit is not known.