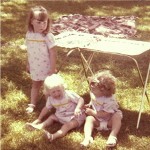 As little girls, my daughter, Amy and her cousin, my niece, Machelle had an up and down relationship. One minute they were friends, and the next minute the were at each others throats. Being just six months apart in age, and both pretty headstrong, they each had specific ideas about how things should go when they are playing together, and when the other one disagreed…wow!!

Being the younger of the two, Machelle often thought it was ok to take Amy’s toys away from her. Now Amy tends to be slow to anger, so she would pick up a different toy, only to have Machelle take that one too. After a few such episodes, Machelle’s mom, my sister-in-law, Debbie said, with a laugh, how cute it was that Machelle kept taking Amy’s toys away. Knowing my daughter, as I did, I knew that she would be patient with her younger cousin…for a 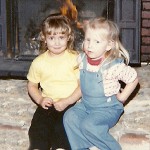 while, and then my little girl would handle things in the only way she could…she would pop her cousin one, squarely in the nose. I felt that I should warn my sister-in-law, so I told her what was about to happen. She decided that it was best to move her daughter a little further away from mine.

Of course, not every encounter was like this one, and Amy was not always the winner, but the girls did tend to…disagree a lot in those early years, and because they were just kids, they didn’t always grasp the whole “don’t hit your cousin” thing. It happens sometimes, and often when the cousins are the same sex and near the same age. There were times when the girls could easily drive us crazy back then. In fact, sometimes I wondered how we managed to survive those fighting years, since they fought every time they were together.

Still, there were times when the girls were best friends, and we wondered how long it would 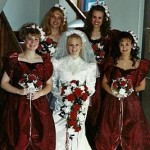 last this time. How could two girls be such strong enemies one minute, and the next minute, such good friends. A number of years have gone by now, and those little girl days are long past. Amy and Machelle no longer fight like they used to. In fact, they don’t fight at all, and Machelle was even a bride’s maid in Amy’s wedding. Maybe they got all that fighting over with when they were little, or maybe it had nothing to do with the two of them, and everything to do with normal child interaction. I guess it doesn’t matter really, since we no longer have to separate them. They have both turned into wonderful women, who have proven themselves to be sweet and kind to everyone around them.