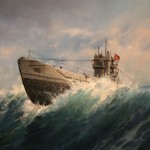 Submarines have been around a long time, but during the world wars, Germany built a submarine that was superior to any other submarine of the time. Called the U-Boat, the name was short for Unterseeboot, or under sea boat. Winston Churchill said, “the only thing that ever really frightened me during the war was the U-boat peril.” Churchill identified the threat that the U-Boats posed. The Atlantic Lifeline was vital to Britain’s survival. If Germany had been able to prevent merchant ships from carrying food, raw materials, troops and their equipment from North America to Britain, the outcome of World War II could have been very different. Britain might have been starved into submission, and her armies would not have been equipped with American built tanks and vehicles. The U-Boats were a serious threat. The Battle of the Atlantic was a must win situation. If Germany won that battle, Britain would likely have lost the war.

From 1918 on, Germany was not supposed to have submarines or submarine crews. However, no checks were in place to stop any research into submarines in Germany and it became clear that during the 1930’s, Germany had been investing time and men into submarine research. Their research and subsequent development of the U-Boat made it a submarine that was very difficult to locate and that made it extremely dangerous. They developed the Enigma machine, which was a series of electro-mechanical rotor cipher machines developed and 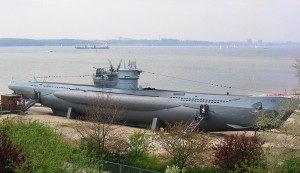 used in the early to early-mid twentieth century for commercial and military usage. Enigma was invented by the German engineer Arthur Scherbius at the end of World War I. The codes it could provide were difficult to decipher. German military messages enciphered on the Enigma machine were first broken by the Polish Cipher Bureau, in December 1932. This success was a result of efforts by three Polish cryptologists, Marian Rejewski, Jerzy Rózycki and Henryk Zygalski, working for Polish military intelligence. Rejewski reverse-engineered the device, using theoretical mathematics and material supplied by French military intelligence. Then, the three mathematicians designed mechanical devices for breaking Enigma ciphers, including the cryptologic bomb. In 1938, the Germans made the machine more complex, and increased complexity was repeatedly added to the Enigma machines, making decryption more difficult and requiring further equipment and personnel. It was more than the Poles could readily produce.

Finally there was a breakthrough. The astonishing achievements of the codebreakers of Bletchley Park saved countless lives. At their peak, there were 12,000 codebreakers at Bletchley Park, 8,000 of them women. The codebreakers helped bring victory in North Africa by giving British commander General Montgomery details of 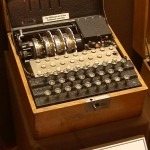 Erwin Rommel’s battle plans and providing the routes of the Nazi supply convoys. This allowed the Royal Navy the opportunity to sink them. Prior to the codebreakers, the U-Boats were only sunk after damage or near damage was done to other ships. Such was the case with the first sinking of a U-Boat. German submarine U-39 was a Type IXA U-boat of the Kriegsmarine that operated from 1938 to the first few days of World War II. On 14 September 1939, just 27 days after she began her first patrol, U-39 attempted to sink the British aircraft carrier HMS Ark Royal by firing two torpedoes at her. The torpedoes malfunctioned and exploded just short of the carrier. In retaliation, U-39 was immediately hunted down by three British destroyers. She was disabled with depth charges, and subsequently sunk. All crew members survived and were captured.