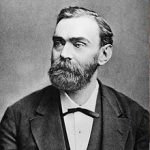 When Alfred Bernhard Nobel, the Swedish inventor of dynamite and other high explosives, died on December 10, 1896, he left a request in his will, that the bulk of his vast fortune be placed in a fund to finance an award to be “annually distributed in the form of prizes to those who, during the preceding year, shall have conferred the greatest benefit on mankind.” He did not state why he wanted to make such a bequest, but it was believed that he did so out of moral regret over the increasingly lethal uses of his inventions in war. The first Nobel Prizes are awarded in Stockholm, Sweden, in the fields of physics, chemistry, medicine, literature, and peace. The ceremony came on the fifth anniversary of Nobel’s death.

Educated in private schools in Saint Petersburg, Russia, Nobel excelled in Swedish, Russian, French, English and German. His primary interests were in English literature and poetry as well as in chemistry and physics. His interest in literature and poetry, was upsetting to his father, who considered him an introvert. He wanted his sons to become engineers, and to join his enterprise. In an effort to redirect Alfred’s interests, his father sent him abroad for further training in chemical engineering. During a two year period Alfred Nobel visited Sweden, Germany, France and the United States. In Paris, the city he came to like best, he worked in the private laboratory of Professor T J Pelouze, a famous chemist. There he met the young Italian chemist Ascanio Sobrero who, three years earlier, had invented nitroglycerine, a highly explosive liquid. Alfred Nobel proved himself to be a brilliant chemist. When his father’s business faltered after the end of the Crimean War, Nobel returned to Sweden and set up a laboratory to experiment with explosives. In 1863, he invented a way to control the detonation of nitroglycerin, which was previously regarded as too dangerous for use. Two years later, Nobel invented the blasting cap, an improved detonator that brought about the modern use of high explosives. Previously, the most dependable explosive was black powder, a form of gunpowder. Nitroglycerin remained dangerous, however, and in 1864 Nobel’s nitroglycerin factory blew up, killing his younger brother and several other people. Searching for a safer explosive, Nobel discovered in 1867 that the combination of nitroglycerin and a porous substance called Kieselguhr produced a highly explosive mixture that was much safer to handle and use. Nobel called his invention “dynamite,” for the Greek word dynamis, meaning “power.” Securing patents on dynamite, Nobel acquired a fortune as humanity put his invention to use in construction and warfare. Over his lifetime Alfred Nobel earned 355 patents.

All his work, left little time for a social life. At 43 years of age, feeling lonely and old, he placed an add for a woman who might become a suitable mate for him. The only one who came close to being the one, was Countess Bertha Kinsky, unfortunately she returned home and married Count Arthur von Suttner, but she and Nobel remained friends and kept writing letters to each other for decades. Over the years Bertha von Suttner became increasingly critical of the arms race. She wrote a famous book, Lay Down Your Arms and became a prominent figure in the peace movement. No doubt this influenced Alfred Nobel when he wrote his final will which was to include a Prize for persons or organizations who promoted peace. Several years after the death of Alfred Nobel, the Norwegian Parliament decided to award the 1905 Nobel Peace Prize to Bertha von Suttner.

The first Nobel Prizes were awarded on December 10, 1901, and subsequent prizes are awarded each year on 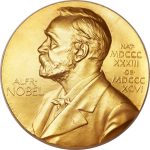 December 10, because it is the anniversary of Alfred Nobel’s death. It is the perfect day for the awards to be given. The Royal Swedish Academy of Sciences decides the prizes in physics, chemistry, and economic science. The Swedish Royal Caroline Medico-Surgical Institute determines the physiology or medicine award. The Swedish Academy chooses literature, and a committee elected by the Norwegian parliament awards the peace prize. In 2006, each Nobel Prize carried a cash prize of nearly $1,400,000 and recipients also received a gold medal, as is the tradition. Some notable winners have included Marie Curie, Theodore Roosevelt, Albert Einstein, George Bernard Shaw, Winston Churchill, Ernest Hemingway, Martin Luther King Jr, the Dalai Lama, Mikhail Gorbachev, and Nelson Mandela. All made Nobel efforts in their field.