The Joys Of Siblings 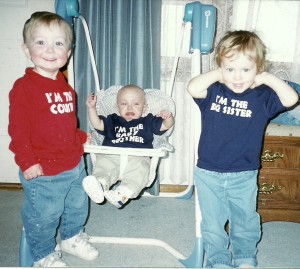 My granddaughter, Shai was not always a fan of her little brother. Like many older siblings, she often wished that she had been an only child. Of course, many kids wish that when their younger sibling comes along. They get less attention, and they have to share their toys. Sometimes, it’s because the new baby cries a lot, as was partly the problem for Shai…at least until Caalab started teasing her, as brothers often do to their sisters. Early on though, Shai liked her little brother…except when he was crying. Then she wished her parents could somehow send him back where he came from.

Being a girl, Shai has a motherly side, but not so much when it comes to her brother. As far as she is concerned, brothers are best when they are seen and not heard, and the less seen the better. In fact, never coming out of his room is a pretty good idea, since she can’t send him back where he came from. Of course, Caalab has an entirely different view of things. Girls are for picking on, and they should take it with a smile. She is welcome to have her door closed when she is getting dressed, but all other times of the day should be open season on his sister. My guess is that by now, you can see the problem these two had.

Of course, much has changed as they have grown older, and most of the time they get along well…provided Caalab keeps his teasing to a tolerable level, but as little kids, it was a different story. Shai tried everything to shut her brother out, since hearing him at all annoyed her. Covering her ears didn’t always work very well, and closing her door wasn’t any better. Finally, she hit on the perfect plan. She would borrow her grandpa’s ear muffs, that he used when mowing the lawn to protect his ears. She figured that since they were powerful enough to block out most of the lawn mower’s noise, they should work on her little brother. And, I suppose it would have worked too, except for the simple fact that they only blocked out sound. Her little brother was still there. I’m sure glad that those days were short lived, because otherwise, I might only have two grandsons, instead of three.