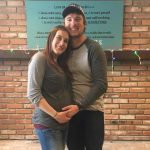 For my nephew, Eric Parmely, married life has mostly been about being outnumbered by girls…at least since he and his wife, Ashley started having children. Don’t get me wrong here…Eric wanted girls. He came from a family with three boys, and he was the youngest. He had always wanted to have a daughter, and really never expected to have one. Let’s face it, in a family of all boys, having a girl is highly unlikely. Nevertheless, Eric and Ashley beat the odds and had not only one daughter, Reagan, but were blessed with a second daughter, Hattie. 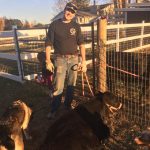 Eric and Ashley had purchased a house in the country, next door to her parents. They wanted the country life, and with her parents horses, they knew that they would be able to give their children the kind of life they wanted for them. Living in the country and having animals, is something they are all interested in. The girls don’t care that farming and caring for animals is a “dirty” job, because they love their animals. They get right out there and help their Daddy and Mommy with whatever they are doing on the farm. 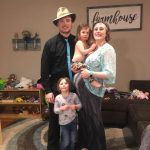 Eric’s life is full and happy, but now…if it is possible, his life is going to get even more full. They are now expecting a little boy to join their family in the near future. While Eric and now his little boy will still be outnumbered by the girls in the family, they can at least say that they have each other when outnumbering becomes an issue. Although, when in coms to getting into the bathroom when teenaged girls are in there…all bets are off. It’s going to be fun to watch the transition from all girls to a boy in the family, and I know that they many stages that are to come will be lots of fun for both Eric and Ashley. And after all, it’s all about building a life. Today is Eric’s birthday. Happy birthday Eric!! Have a great day!! We love you!!