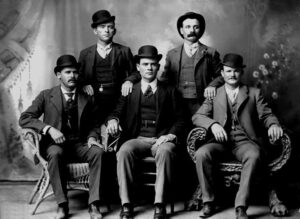 The American cowboy hat. Anyone who knows anything about the Old West knows about the Stetson cowboy hat, and every great cowboy wore them, right? Wrong. The truth is that in the Old West, most men wore a Derby hat. If you’ve seen the movie, Butch Cassidy and the Sundance Kid, then you have seen a more realistic picture of the Old West.

The myth of the cowboy hat did come about from the hat that was created by John Stetson, and while it was a classic, it didn’t actually come into play until the very end of the 19th century, not the early part like most people think. The Stetson cowboy hat was first introduced in 1865, but it just didn’t take off like John Stetson had hoped. The cowboy hat was based somewhat on a Spanish design, and thr rumor was that a random cowboy saw Stetson’s at and paid him $5.00 for it. After that, it was said to be all the rage.

The truth is vastly different. I don’t know if a cowboy bought that first cowboy hat for $5.00 or not, but while we think that the Derby hat or the top hat were only worn by the bankers, businessmen, or the very rich, that belief is wrong. The early cowboys liked the derby hat best, and those who did not like the Derby usually wore a top hat or a hat associated with their professions, like a conductors cap. The Derby was also known as the Bowler hat, with many notorious cowboy criminals such as Butch Cassidy and Will Carver wearing them. Even those who weren’t criminals liked the Derby hat on the frontier, because they stayed on in windy conditions and protected the cowboys from the sand. I think anyone who has ever had a hat or cap blow off in the wind can relate 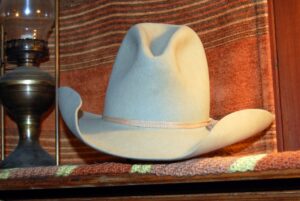 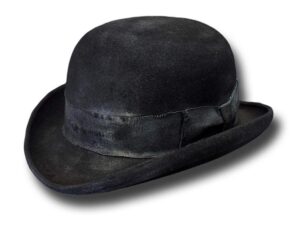 While most cowboys today, and even those who just like “all things country” prefer the cowboy hat these days, and the manufacture of cowboy hats is big business these days, they certainly didn’t start out that way. It’s hard for me to picture cowboys in a Derby hat, but history would prove that the Derby hat was, in fact, what they wore.