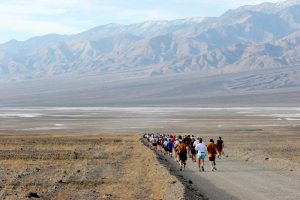 Some people like hot weather and some people like cold weather, which is probably a good thing, or we would all live in one area, and the overcrowding would be horrible. I personally prefer Spring and Summer, mostly Summer, but even I have to admit that I probably couldn’t do Summer very well without air conditioning. That said, I don’t think I could stand living in Death Valley or much of the surrounding area. Death Valley is the hottest place in the world. It is also the lowest and driest place in United States, and because of that conditions there can get pretty extreme. On July 10, 1913, the thermometers at the Furnace Creek Weather Station recorded its temperature to be 134 degrees which is the highest ever recorded temperature. I can’t even begin to imagine how awful that must be, and yet there are people who run in races in Death Valley.

Death Valley has over 1,000 miles of road for running! That might seem interesting, but the weather in Death Valley can be a very interesting. It would be an extreme place to take a run! The trails aren’t always well maintained, giving the park endless cross country opportunities for rocky runs. Many people stick to the roads. Even then, the heat can be very hard on the shoes. Death Valley, California, residents say the are used to the 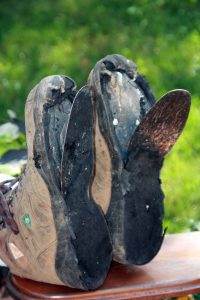 Still, as hot as it is in the valley, the towering peaks around the valley have snow on them. Elevation makes a big difference. In fact, as extremes go, there is a remote corner of Death Valley National park, cradled in between the Cottonwood and Last Chance mountain ranges, that sports an intriguing natural history mystery, Racetrack Playa. Here, slabs of dolomite and syenite, ranging in size from a couple of pounds up to 1,000 pounds, leave visible tracks as they slide across the playa surface, without any sign of human or animal intervention. It is a phenomenon that for decades visitors and scientists alike have puzzled over. How could large rocks slide across the sand without help? People thought maybe it was rain water, but that proved wrong. The situation has remained a mystery for many years, because no one ever “caught” the stones moving. Recently, photographic and scientific evidence revealed the truth.

In 2011, Richard D Norris and James M Norris, in conjunction with the Scripps Institution of Oceanography, launched the “Slithering Stones Research Initiative.” They got permission from the National Park, to install a weather station and placed fifteen stones on the southern end of the playa equipped with GPS devices to record movement and velocity. Most of the natural sailing stones begin their strange journeys across the playa at this point, tumbling onto the hard, flat surface from a nearby cliff. Finally, in December of 2013, Richard and James stumbled into a rare confluence of events that allowed them to not only witness the stones moving, but to photograph it. So, what causes it. According to Richard and James, “First you need rain to turn the playa back into a shallow lake, followed by a cold that will freeze a layer of ice over the playa before it evaporates. Then 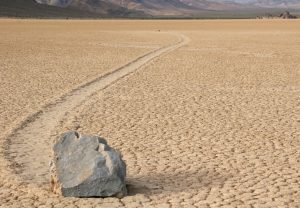 you need a sunny day and a light wind. The wind and sun work together to crack the ice into sheets hundreds of feet wide and as thin as 1/4-inch, which then blow against the rocks. The ice then acts as sails, sliding the rocks along the slippery mud in a direction determined by the wind. This process is very slow, the stones rarely moving faster than a few inches per-second, which makes the motion easy to over-look without a fixed point to compare them to.” I’m not as amazed that a layer of ice is involved, but rather that a place that is known as the hottest place on earth, can suddenly have rocks that slide across the desert on ice. The conditions had to be perfect. Too much water, wind, or heat, would make it impossible.