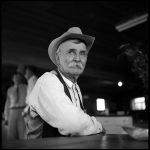 George “Bitter Creek” Newcomb was the first member of the infamous Dalton Gang…an outlaw gang in the Old West. Newcomb was born in 1866 near Fort Scott, Kansas. The Newcomb family was poor, and he began working as a cowboy at the age of twelve. Newcomb’s first job was on the “Long S Ranch” owned by CC Slaughter. By 1892, he had drifted into the Oklahoma Territory, where he first met Bill Doolin. Newcomb would meet up with Bill Doolin again, in a deadly way.

As a part of the Dalton Gang, Newcomb met up with Doolin and also met Charley Pierce, who were also members. The three men took part in the botched train robbery in Adair, Oklahoma Territory, on July 15, 1892. During the robbery, two guards and two townsmen, both doctors, were wounded. One of the doctors died the next day. Doolin, Newcomb, and Pierce complained that Bob was unfairly dividing the money fairly amongst the gang. They left in a huff, but later returned. It was at this point that Bob Dalton told Doolin, Newcomb, and Pierce that he no longer needed them. Dalton said that Newcomb was “too wild” for his gang, and Dalton left. Doolin and his friends returned to their hideout in Ingalls, Oklahoma Territory. On October 5, in Coffeyville, Kansas, the remaining members of the Dalton Gang were killed…except Emmett who survived despite being shot 27 times. 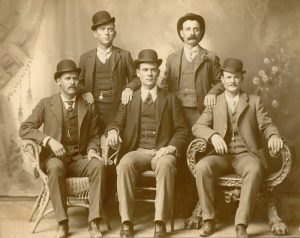 I suppose it was fortunate for Newcomb, Doolin, and Pierce that they were no longer part of the gang.

In 1893, Doolin organized his own gang from the remains of the original Dalton Gang, with Newcomb as a member, calling them the Wild Bunch. Bill Dalton later also joined the group and they became known as the Doolin-Dalton Gang. Newcomb began a romantic relationship with a 14 year old girl named Rose Dunn. She had four brothers who were outlaws and knew Newcomb. They would later become bounty hunters, calling themselves the Dunn Brothers. By 1895, Newcomb was a fugitive with a $5,000 reward on him, dead or alive. Rose Dunn traveled with him, since she could easily go into a town to purchase supplies, and no one knew that she was a part of the gang. This was the perfect plan to keep the gang hidden.

The gang often hung out in the town of Ingalls, Oklahoma. In those days, numerous outlaw gangs of the day took refuge there, and oddly, local residents often defended the outlaws and assisted in hiding them from lawmen. This was mostly due to the outlaws contributing greatly to the local economy. In one shootout with lawmen in Ingalls, called the Battle of Ingalls, three lawmen and three outlaws were shot. After several 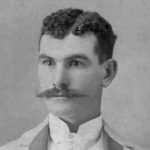 shootouts with lawmen, Newcomb fled with outlaw Charley Pierce to a hideout near Norman, Oklahoma, both of them wounded in the Ingalls shootout with US Marshals.

On May 2, 1895, Newcomb and Pierce rode up to the Dunn ranch, possibly to visit Rose. As soon as they dismounted, her brothers opened fire, dropping both outlaws. The next day, the Dunn brothers had loaded the two bodies into their wagon and were driving it into town to collect the reward, when Newcomb suddenly moaned and asked for water, to which one of the brothers responded with another bullet. I guess the bounty on their heads outweighed the friendship the Dunn Brothers had previously with the Wild Bunch.