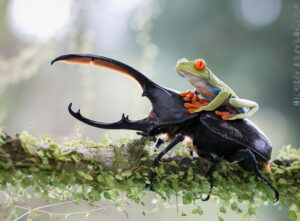 The Alaskan Wood Frog is a unique amphibian, and not one I would probably be interested in, but this one is special. It’s not just that they live in Alaska, where it gets quite cold part of the year, and it’s not their strange looks…long skinny legs, orange eyes, or orange toes. Strange looking as that is, in the wild it is not that unusual. The unusual thing about these frogs is that they have a high tolerance to subzero temperatures. In fact, that cold tolerance is so strong that when winter sets in, the Alaskan Tree Frog begins to freeze. It doesn’t burrow underground, or migrate to the south, or any other evasive action, it just freezes in place, and in the position that it is in, as it freezes.

As the Alaskan Wood Frog freezes, little ice crystals form all over its body, and it begins to look like a frog snowman…or iceman. The frog’s heart stops and blood no longer flows. All of its organs are frozen. I suppose I have basically just described the death of the Alaskan Wood Frog, but I have not. This tiny amphibian can survive being almost completely frozen during winter, only to miraculously come back to life as soon as spring arrives!

It is a type of hibernation, I suppose. It isn’t the kind of warm, cozy, sleep-off-the-fat type of hibernation that bears go through. For days, even weeks at a time during its period of winter hibernation, over 60 percent of the frog’s body freezes. The frog stops breathing and its heart stops beating. All of its physical processes, such as 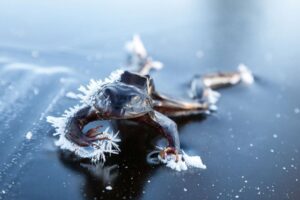 metabolic activity and waste production come to a halt. “For all intents and purposes, they are dead,” said Don Larson, a Ph.D. student at Fairbanks, Alaska. As per his research, wood frogs can survive long winters where temperatures ranging between -48 Celsius to -64 Celsius. In fact, it can go through 10 to 15 freeze/thaw cycles over the course of a single season.

As researchers have studied the amazing Alaskan Wood Frog, they have discovered the reason that the frog can survive such an extreme hibernation cycle. They have discovered that the reason for this the miraculous phenomenon is the high concentration of cryoprotectants in the wood frog’s tissues. What are cryoprotectants, you might ask. I wondered too. Cryoprotectants are “solutes – including glucose and urea.” They lower the freezing temperature of the frog’s cells, helping them survive. Exposure to subzero temperatures for a long time could cause cellular shrinkage in most animals. During the freezing process, water is pulled from the body’s cells to form ice, eventually sucking them dry and killing the cell. Cryoprotectants help the cells resist shrinkage in the wood frog, basically saving their lives. “The solutes tend to depress the freezing point. It limits the amount of ice that actually forms in the body at any part,” said Jon Costanzo of the Department of Zoology at Miami University in Ohio, who has been researching wood frogs for the past 25 years. 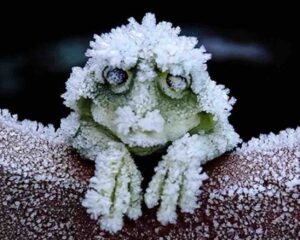 organs and tissues can be frozen and unfrozen without damaging them. That could be an amazing step forward in the area of organ transplants. Costanzo explained, “There’s an obvious parallel between what these frogs are doing to preserve all of their tissues simultaneously and our need to be able to cryopreserve human organs for tissue-matching purposes. If you could freeze human organs even for a short period of time, that would be a major breakthrough because then these organs could be shipped around the world, which would greatly [improve] the donor-matching process.” It amazing that the seemingly insignificant study of a frozen Alaskan Wood Frog could have such a great impact on the medical world of humans.