When most people think of the barracks, they think of a military facility, but not so my mother’s family. For all of their childhood, the barracks meant the bedroom. No, it isn’t because that is what they called the bedroom, because, they didn’t call the bedroom that. While visiting with my aunts, Sandy Pattan and Bonnie McDaniels, and cousins Susie Young, Shannon Limmer, and Jamie Patsie, after my mother passed away a week ago, we got on the subject of precious memories…which naturally took us to my grandpa and grandma, George and Hattie Byer’s house in North Casper, where they lived for many years right next door to his mother, my great grandma, Edna Byer. The two houses were very similar, but my grandparents house had an extra, very long bedroom attached to the back of the house. Grandma and Grandpa’s room was in from of that back bedroom, and there was another room where the two boys slept, but the girls all shared that huge back bedroom.

We always loved to go play back there, because it was a long room with lots of beds, and it just seemed very interesting to all the grandkids. I suppose that to the aunts and uncles, it was just normal, be we had really never seen anything like it. We began to talk about what spending the night in that back bedroom was like. There was no heat in that back room, so at night grandpa would heat rocks in the cook stove, and wrap them in a towel. Once the girls were tucked into bed, under a mountain of blankets, grandpa would come in and stick those towel wrapped rocks under the blankets at their feet. What a wonderful thing those rocks were. Aunt Bonnie tells me that they would immediately put their feet on those rocks, and before long, they would be all warm and cozy for the night. In the absence of heat, the blankets and the rocks did the job of keeping them warm quite well.

For us grandkids, the best way to play in that room in the winter cold, was to keep moving. I don’t think my aunts spent much time in there other than sleeping, because it was just too cold in winter. The main living room and kitchen were heated by the cook stove, and I’m here to tell you that those rooms were very warm…a fact that was just fine with me, since I have a tendency to get cold. Nevertheless, after some time in the main part of the house, the cooler bedroom could come as a nice change, until you got cold, then you went back out to the main rooms to warm up.

I had always wondered about the house with the long bedroom, and how it came to be…but no longer. As we were talking about those old days, my Aunt Sandy cleared that question right up. It turns out that both houses, Great Grandma’s and my grandparents, were originally old barracks from the air force base that used to be 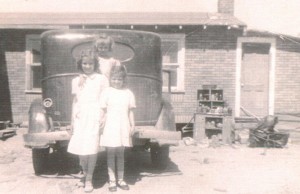 located in Casper. I don’t know for sure when they became the two houses, but that is what happened. My grandparents’ house had the added barracks to it, making up the big back bedroom where so many childhood memories for my mom, aunts, uncles, and many of the grandchildren, were built. In those days, times were tough, and people had to make do with what they had. In my opinion, the barracks and the houses attached to them, were more than just a way to make do. They are the houses I remember fondly from my own childhood years. We used to love going to visit Grandma and Grandpa. The house was always cozy, and my grandparents always pleased to see us. I get a warm cozy feeling just thinking about those visits.