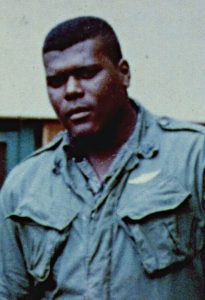 Combat diving…yes, that’s a real thing. Navy divers are used in ships maintenance, marine construction and salvage, demolition and mine clearance, and special forces. Army divers may be used in engineering activities such as bridge construction and demolition, and by special forces units. I guess that when I considered combat diving, I thought of underwater battles, and once in a while, that was the case. One case I heard of recently is that of Robert Hughes. Sergeant Hughes served as the Dive NCO for First Force Recon Company during 1967 to 1968. Born September 26, 1951, Hughes grew into a tall muscular man, and that helped him in the performance of his duties. During the Vietnam War, it seems that while divers had jobs to do routinely below the surface of the water, the Vietcong had a tendency to try to sabotage the divers, and that’s when they knew what real combat diving was.

While hunting the Vietcong fighters, it was not uncommon for US troops to observe the Vietnamese flee underwater and never reemerge. It was proof that they had made their escape into one of the countless tunnel entrances located below the water. The US had scuba trained Force Recon Marines, who would comb the river bed looking for bodies, equipment caches, or 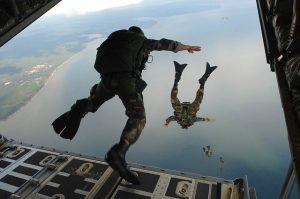 enemy tunnels. It was during one such mission that Hughes fought the battle that would earn him his reputation.

Hughes had always been called a “gentle giant” by the Marines he served with. Of course, it was his size that earned him the giant part…Hughes towered over many of his peers. He was a gentle man, but all that disappeared when he was engaged in a battle with the VC fighters. Then he became a virtual tiger. On one dive mission, Hughes was given the task of locating an underwater tunnel. He was searching through the murky darkness. As he felt his way along a bank with one hand, Kabar knife ready in the other. He located what appeared to be the tunnel entrance, and suddenly an enemy diver shot out of the hole. A fierce battle ensued. It was a fight for his life. Hughes knew that he had to kill or be killed. Submerged and hampered by limited visibility, Hughes fought to get control of 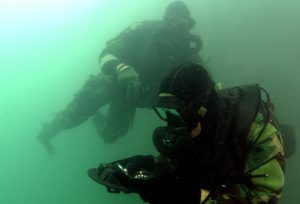 his enemy. Finally, he gained the upper hand. Hughes wrapped his legs around his enemy and pulled him in close. Then he spit out his regulator, lunged forward, and bit into the diver’s throat, ripping it out. The diver released his grip and Hughes finished the fight. This wasn’t the only “kill” to Hughes’ credit, but it was quite possible the most dramatic. Not many people have fought to the death by ripping out the throat of their enemy with their teeth. Hughes was a tiger in battle. One marine who served with him, said, “There was no one I would rather have as security underwater than Sergeant Hughes.” Hughes was an amazing soldier. Sergeant Robert “Gentle Giant” Hughes died on February 14, 1990.