I Can’t Find It

As kids, most of us have varying degrees of difficulty keeping track of our toys, mittens, coats, shoes, homework, and other such vital items, and when it comes to actually looking for those lost items, we somehow seem to be less than adept. How can so many things simply disappear in our rooms? I used to think that my daughter, Amy had a black hole in her room, because some of that missing stuff was never heard from again…even when we moved!! Nevertheless, Amy was not alone in her mysterious disappearances. It seems to be a common problem among children…and some adults are no better at keeping track of their things…losing cell phones, keys, paperwork, remote controls, and any other item that they were going to put in a safe place, so it would not get lost.

I remember so many times as a kid, when I couldn’t find something, and my mom would tell me to go look for it, because she didn’t have time to hunt for it when we were fully capable.

That did not inspire us to go and search our rooms in depth until the much needed item was found, but rather caused us to wander aimlessly around our room…playing with other things that came into our line of sight, because those things seemed much more important than looking for a lost shoe on a school day. Then after playing for a little while, we would wander out to the front room again, whining to Mom that we just couldn’t find it. It was our hope that Mom would finally take pity on us and come to help us hunt for that missing item. Most of the time we were sadly disappointed…except for the possibility of the missing shoe on a school day, which usually found us wearing some other pair of shoes, that probably didn’t really go with the outfit we had on, but would have to do, because like it or not, we were going to school. Mom wasn’t about to let something as minor as wearing a dress with tennis shoes, keep us home on a school day.

So, we usually found ourselves back in the bedroom, hunting for that missing item again, and wishing Mom would just come and find it, because she was so much better at looking for

things than we were. I suppose that she was right in making us do things for ourselves. I think I do better than the average person at keeping track of my things these days, because of Mom’s teachings. Although I must admit that I still lose things sometimes too. Mom taught us to put things away, although we don’t always do so…even today. But the thing I remember the most about those times when I was in my room hunting for a lost item, and unable to find it, was my mom saying, “You’ll never find it if you keep looking for it on the ceiling”, which meant quit walking around the room hoping it will jump out at you, and start looking under the bed, in the drawers, or in the closet, so you will find it already. 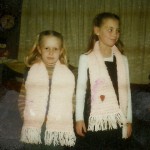 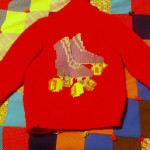 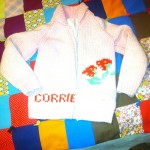