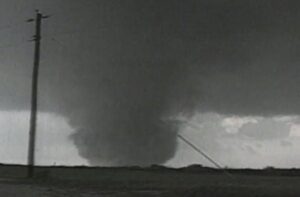 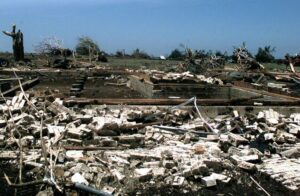 Tornadoes can happen anywhere, but there are areas of the country that are more prone to tornadoes. Nevertheless, the F-5 tornado is extremely rare, and thankfully so, but when one hits a town, it is…devastating!! On May 27, 1997, an F-5 tornado his Jarrell, Texas, killing 27 people and destroying dozens of homes. That damage and loss of life was horrific, but it was what happened afterward that was truly amazing.

Once the news of the devastating tornado broke, people from near and far started showing up to do whatever it took to help out. In fact, people showed up by the busloads. The people were there to help with the cleanup, but that wasn’t really all they were there for. Upon arrival, they found that there was a great need for blood, because many who were critically injured needed blood and without a second thought, they showed up at blood banks and hospitals, ready to donate the critical blood that was needed. Besides giving blood, volunteers helped pick up debris and rubble. The work was hard, but those who arrived in Jarrell wanted to show their support to the residents of the devastated town.

The town of Jarrell, population around 400 at the time of the tornado lost entire families, like the Igo family of five, the Moehring family of four, the Smith family of three, and the Gower family of 2. but since the tornado, the town has really been growing. These days, Jarrell has more than 1750 people in residence. Really, that goes to show that these people were not going to give up. They were going to rebuild their lives and their town. Twenty-five years can make a huge difference in a town’s history. People can forget what happened so long ago, but if the survivors never forget, they can pass the history of the tragedy on to the future generations.

I’m sure that over the years, there were those who couldn’t bear to stay there any longer. That happens too. Not everyone is able to move on from the past, and sometimes people just don’t want to stay where there has been so much loss. There is really no right or wrong thing to do, it is simply what the people who went through

the tragedy need to do in order to heal. As for the town, it has been rebuilt and it is growing all the time. I think that Jarrell will thrive again, and maybe even become a larger city in time. The fact that the town has the ability to heal and move on is due in large part to the help of the amazing people came to the rescue 25 years ago in Jarrell’s hour of need. 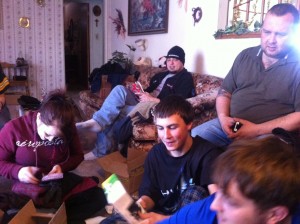 The rush is over, the gifts given, dinner is over, and for most of us…it’s back to work. In many ways, that comes as a relief to me because there are just times that you need to go back to work to rest up. And some holidays are worse than others, some years worse than others. There are some times when you feel like everything went so smoothly that you wish the day would not end so quickly. Then, there are those when you think, “Are we done yet?” The headache won’t go away, and you are so tired you can’t walk another step. Holidays when you think to yourself, “Why am I doing this again? Oh, that’s right, It’s for the kids.” And that is really is true, I think…or is it still that kid inside us all.

Even if the actual holiday or even the days leading up to it are hectic, we still find ourselves excited for it’s arrival. The gifts have been bought, and it is our hope that the person we bought them for will be very excited about our choices. We have planned the meal and with our mouth watering, we anticipate meal time’s arrival. After the meal, we are almost…or maybe we just are…too tired to even think of the cleanup, and secretly we hope that someone else will clean it up for us…but of course, they don’t. There is no cleaning fairy to do it. It’s up to you. 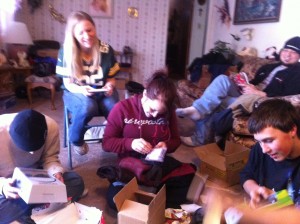 We drag ourselves to bed that night and think, “I’ll clean up tomorrow.” Then tomorrow arrives, and we wish that we had cleaned up last night, because we don’t feel any more like doing it today than we did yesterday. In fact, the looming cleanup job makes us tired all over. So we head off to work and hope that with enough coffee, we can somehow find the energy to get the job done when we get home. I don’t know about you, but, that day after a holiday is one tough day to swallow, so I’m sure glad that I have lots of help with it these days, and that there is very little clean up left for that day after.