Brave Beyond Her Years 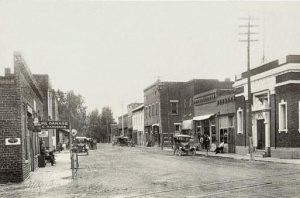 Jessie Earl, who was born in Crawfordville, Indiana on April 22, 1887 to John and Amanda (Tracy) Earl, was a very resourceful, and brave girl, although not many people would have known that had she not found herself in the situation she did on a Monday in December, 1901. School was over for the day, and Jessie was walking home. Her family was living in Advance, Indiana then, which was a small town about 15 miles west of Crawfordsville. Jessie’s walk took her beside the train tracks for a about a mile.

As Jessie was walking along she saw that the railroad trestle she passed every day was on fire. She immediately headed to find someone to warn, but at that moment she heard the train whistle. She knew she was out of time, and she would have to save the train herself. I can’t imagine a girl of just 13 years having the courage to do what she did next. The train, Chicago and Southwestern Railroad’s east-bound passenger train, was headed for serious danger, and no one knew what was happening…except a 13 year old girl. Jessie, however, was no ordinary girl.

She saw that the train was headed toward the burning trestle at full speed. By the time they saw the fire, it would be too late to stop the train. Jessie immediately dropped her basket and rushed down the track toward the train, running as fast as she could. She started waving her apron, to attract the attention of the engineer, who upon seeing the little girl, brought the train to a safe stop. I’m sure that his first thought was, “What is this crazy girl doing?” Nevertheless, he made the quick decision to stop to find out what the emergency was.

Upon inspection, the crew found that the burning trestle would never have held the weight of the train, and the resulting crash and derailment would have been catastrophic for the passengers and crew. When they saw what Jessie had saved them from, the crew and passengers almost smothered the little girl with congratulations for her brave act and gave her many mementoes as rewards for saving the train from plunging into the creek, 30 feet below. Of course, like most heroes, Jessie just thought she had done what any other person would do. 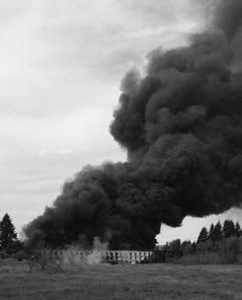 Still, you never know. We have all witnessed people walking right by a person lying on the ground, or driving past the scene of an accident without lending aid, or worse yet, filming it on their smart phones to post on the internet. Of course, the internet didn’t exist then, but I like to think it wouldn’t have mattered to little Jessie Earl. I like to think that she would have done what she did either way, because Jessie Earl seems like a heroic kind of girl.

Sadly, I don’t have a picture of Jessie Earl, but I learned that she married Howard Bratton, and they three children…Dorthea, James, and Opal who went on to give them children and grandchildren. I wonder if they know that their grandmother and great grandmother was a true hero. I wonder if Jessie’s children ever knew. I wouldn’t be surprised to find that they didn’t. Jessie passed away on February 15, 1940, in Muncie, Indiana. She was 52 years old.