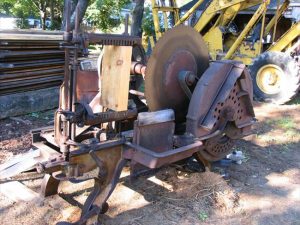 Since I’m not in the manufacturing trade, especially where wooden shingles are concerned, I had no idea that there was a trade called shingle weaving. I would assume that if shingle weaving is still done today, it is probably done by machine, because I would think that this rather dangerous occupation is one that not too many people would voluntarily put themselves into. Shingle weaving, for those who don’t know, was an extremely dangerous process in which the shingle weaver hand-fed pieces of raw wood onto an automated saw. Despite the danger of the profession, the industry was a large one throughout Washington and Oregon and by 1893 Washington state alone had 150 mills which converted Western Red Cedar into shingles and shakes for the roofing and siding of American homes. The workers normally worked ten hour shifts, standing in front of two steel saw blade disks whirling at a speed of two hundred rounds a minute. With his left hand he is feeding blocks of cedar wood into the saw, and with his right hand, he is examining the wood that came out of the left saw for knot holes to be cut out by the saw blade disk in front of him. The worker cannot stop what his right hand and his eyes are doing to see where his left hand is, creating a situation whereby his left hand could easily be cut up or even off, if he doesn’t have a good feel for where his hand is at all times in relation to that left saw blade disk. It doesn’t take much imagination to picture the concerns the workers had.

On May 1, 1916, the workers decided that they weren’t receiving enough pay for this very dangerous occupation, and the mill owners disagreed, so the Everett Shingle Weavers Union went on strike. The strike was quickly settled, in favor of the mill owners, at all but the Jamison Mill. It was at this point that the Industrial Workers of the World (IWW) got involved. A 1909 IWW strike in Spokane had cost the city over $250,000, a great deal of money at that time, so when the IWW came to Everett, the city government quickly became quite nervous. When IWW organizer and speaker James Rowan arrived in Everett on June 30, 1916, Everett became the home of the IWW’s newest Free Speech Fight. The fight, while starting out relatively peacefully, escalated when Rowan chose the corner of Hewitt and Wetmore, where public speaking was illegal, to begin his work…even though free speech was legal at other corners. I’m sure his plan was to provoke the city government in any way he could, and maybe to bring in the press. Speakers were arrested and released, keeping the jail busy for a month and a half. The delicate balance of the negotiation process continued until August 19, 1916, when violence broke out at the Jamison Mill. It was Strike Breakers against the picketers, which is usually how those things go. The mill owners didn’t have to be involved, because when people ran out of money, they had little choice but to go back to work. Those left, didn’t like the line crossing strike breakers. The police didn’t get involved, because they said the fight was on private property, and so didn’t concern them.

On October 30, all that changed when 41 IWW members came by ferry to Everett, to speak at the now notorious corner of Hewitt and Wetmore. The Sheriff and his deputies beat these men, took them to Beverly Park, and forced them to run through a gauntlet of “law and order” officials, armed with clubs and whips. After that horrific incident, the IWW organized a group of 300 men to board the steamers Verona and Calista from Seattle and head north toward Port Gardner Bay, on November 5 for a free 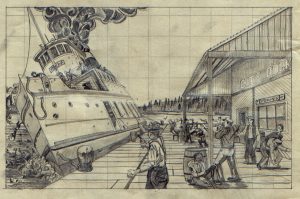 speech rally. The event ended in gun battle now known as the Everett Massacre, in which 5 strikers and 2 vigilantes calling themselves “citizen deputies” were killed and approximately 45 others wounded. The vigilantes met the IWW free speech protesters, who were on the Verona, at the dock. As the gunfire ensued, the men on the Verona ran to the opposite side, almost capsizing it. Some fell off and drown. Few of the men on the Verona had weapons, and so were defenseless. The vigilantes who were inexperienced in this type of fighting, were careless in their aim, and so in the end, many of the vigilantes who were killed or wounded were shot in the back by their own group. The massacre, also known as Everett’s Bloody Sunday, was the bloodiest battle in Pacific Northwest labor history.