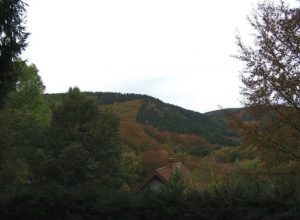 Many people know about the Christmas truce of 1914, when in World War I, thousands of British, French, and German troops, exhausted from fighting took the night of Christmas Eve to stop fighting, leave their trenches, and meet the enemy forces in what was known as “No Man’s Land” to exchange gifts, food, and stories. For the soldiers, it was a moral boost, but the Generals disagreed, and determined to prevent further fraternization in the future, saw to it that such activities would be severely punished, thereby ending future Christmas truces for the rest of that war, or the following war. I suppose the Christmas “truce” would have been better called a “cease fire” since they weren’t supposed to fraternize.

In World War II, of course, there was no such truce called, and the fighting continued without taking notice of the holiday. Nevertheless, in 1944, during the Battle of the Bulge, the generals lost just a little bit of their control over the people, when in defiance of the orders, a small group of unlikely guests made their way to a little cabin in the Hurtgen Forest, for a little Christmas Truce of their own. They could have been in so much trouble had they been found out by superior officers, but at the time it just didn’t seem to matter, or maybe it was their host, one Elisabeth Vincken, who along with her 12 year old son stood up to the soldiers, and held off the battle for a few hours. After their home in Aachen was completely destroyed, Elisabeth and her son, Fritz were sent to their cabin, about four miles from Monschau in the Hurtgen Forest near the Belgian border. Her husband visited them as often as he could, but he needed to work. On that Christmas, Elisabeth and Fritz, had been hoping her husband would arrive to spend Christmas with them, but now they knew it was too late. Their Christmas meal would now have to wait for his arrival. Elisabeth and Fritz were alone in the cabin.

Then, the miracle began. Lost in the snow-covered Ardennes Forest, three American soldiers…one badly wounded, wandered around, trying to find the American lines. These poor men had been walking for three days while the sounds of battle echoed in the hills and valleys all around them. They had now idea who was shooting, so they dared not enter the area. Then, on Christmas Eve, they came upon a small cabin in the woods. They cautiously knocked at the door, hoping that they didn’t get shot. Elisabeth blew out the candles and opened the door to find two enemy American soldiers standing at the door and a third lying in the snow behind them. These men might have been soldiers, but were hardly older than boys. The men were armed and 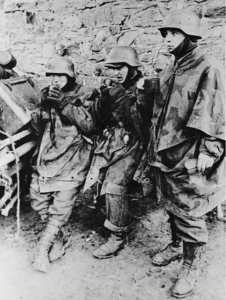 could have simply pushed their way in, but they hadn’t, so she invited them inside and they carried their wounded comrade into the warm cabin. Elisabeth didn’t speak English and they didn’t speak German, but they managed to communicate in broken French. After she heard their story and saw the wounded soldier, Elisabeth gave up the idea of saving the Christmas meal for when her husband could get there. She started preparing a meal for the men. She sent Fritz to get six potatoes and Hermann the rooster…his stay of execution while they waited for her husband was now rescinded. Hermann had been named after Hermann Goering, the Nazi leader, who Elisabeth didn’t care much for. Maybe killing the rooster would make her feel better.

While Hermann roasted and dinner was being prepared, there was another knock on the door. Fritz went to open it, thinking there might be more lost Americans, but instead there were four armed German soldiers. Seeing the German soldiers, and realizing that she could be killed for harboring the enemy, Elisabeth turned white as a ghost. She quickly pushed past Fritz and stepped outside. There was a corporal and three very young soldiers, who wished her a Merry Christmas, but they were lost and hungry. Knowing she had no choice, Elisabeth told them they were welcome to come into the warmth and eat until the food was all gone, but that there were others inside who they would not consider friends. The reaction she expected came when the corporal asked sharply if there were Americans inside and she said there were three who were lost and cold like they were and one was wounded. The corporal stared hard at her. She had to do something, so she said, “Es ist Heiligabend und hier wird nicht geschossen.” In German, that means, “It is the Holy Night and there will be no shooting here.” She insisted they leave their weapons outside. The men couldn’t believe that this woman was standing up to them in such a way. Nevertheless, the men decided to comply and Elisabeth went inside, demanding the same of the Americans. She took their weapons and put them outside next to the Germans’.

Understandably, the fear and tension in the cabin was high as the Germans and Americans eyed each other warily. Nevertheless, the warmth and smell of roast Hermann and potatoes soon eased the tension, and while the men were still wary, the meal was somewhat cordial. The Germans produced a bottle of wine and a loaf of bread. While Elisabeth tended to the cooking, one of the German soldiers, an ex-medical student, examined the wounded American. In English, he explained that the cold had prevented infection, but the man had lost a lot of blood. He needed food and rest. By the time the meal was ready, the atmosphere in the cabin was more relaxed. Two of the Germans were only sixteen, and the corporal was only 23. As Elisabeth said grace, Fritz 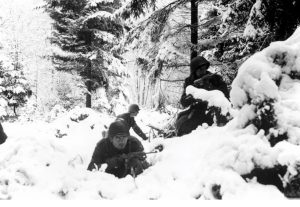 noticed tears in the exhausted soldiers’ eyes…both German and American. The moment had somehow touched them all. The unauthorized and very much unplanned “truce” lasted through the rest of that night, and into the morning. The German corporal looked at the map the Americans had, and pointed out the best way for the men to get back to their lines. He also gave them a compass. The Americans asked if they should instead go to Monschau, but the corporal shook his head and said that the Germans had taken Monschau. Elisabeth returned all their weapons and the enemies shook hands and left the cabin, in opposite directions. Soon they were all out of sight, and the truce was over.