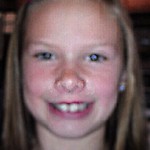 When you’re a kid…especially one who loves to ride horses, it seems to be inevitable that you will get bucked off and have a broken bone or two in your lifetime, but to break both arms at the same time, right before the beginning of summer break is…well, it really stinks. Nevertheless, that is exactly what happened to my grand niece, Jaydn Mortensen. Jaydn loves horseback riding. She has been riding for quite a while now, and recently she has started barrel racing and showing her horses. She is developing into quite an equestrian. It is a skill that comes from a complete and total love of all things…horse. And that definitely describes Jaydn to a tee.

The summer has been a bit of a disappointment for Jaydn, because she fell off of her horse, and in the process, broke both arms. Now, I have never broken a bone, so I can’t say that I understand just how Jaydn feels, but I will tell you this…breaking both arms would pretty much render a person virtually helpless…especially if the cast has to go above and below the elbow. When that happens, the person can’t even do the basic personal care tasks. For an eleven year old girl that would be horrendous. The things you would have to depend on your parents to do, would make you feel like a total baby. I’m not sure how far up her arms Jaydn’s casts went, but in all reality, it is a tough thing to have both arms in a cast…very limiting for sure, and not a fun way to spend half of your summer.

Jaydn loves going to the lake with her parents, four wheeling, and playing in the water, fishing, or anything else he dad is doing. She loves helping him work on cars, four wheelers, or anything he happens to be working on. I’m sure that many of these things were limited too, with two broken arms. It really can be the pits to just have to sit and watch the summer go by. Oh I suppose she could go for walks, and that is something that would interest me, but I’m not sure Jaydn would be very impressed. She would probably think it was boring. 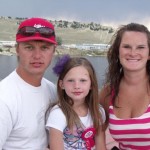 Nevertheless, broken arms can’t last forever, and most casts come off after six weeks, leaving her some of the summer to do what she loves. Still, I expect that having casts on made the summer seem short. While she is looking forward to middle school, I’m not sure she will be ready for it to get here so quickly after getting her casts off. The main thing is that they will be off when school starts, because, lets face it, starting middle school with both arms in a cast would be horrible. So, Jaydn…here’s to a better year, and next time you decide to fall off of your horse, try to land on your feet…because two broken legs is a little easier to deal with…most of the time. Today is Jaydn’s 11th birthday. Happy birthday Jaydn!! Have a great day!! We love you!!