While most of the time my two oldest grandchildren have been good friends, being the same age did sometimes cause some vying for superiority. As toddlers, kids don’t understand the whole boys don’t hit girls thing. They are just two kids who can play well together one minute, and have a huge fight the next minute. The key to most of these little fights is…”I had it first!” It doesn’t matter who it belongs to…except to the one who thinks that ownership should give them the advantage.

No, it doesn’t matter who the item belongs to, or even if it is a toy at all, or in this case, how much a child hates being in the car seat. It’s all about the fact that one child is enjoying the item a little too much. Then it begins. That whole, “it’s mine” or “I had it first” thing. Have you ever really seen a child who likes being buckled into their car seat…at any age? No, of course not. So, what makes that same car seat seem so important when it is in the house and they don’t have to be in it? Well, that’s just it…they don’t have to be in it. They can pretend that it is something else, and not a car seat. Maybe they are driving the car…like their parents do or maybe it is just a chair. Whatever it is, the child who didn’t have the idea, tends to have a problem with it.

It’s the fact that for just a few minutes, one child decided it might be fun to be in the car seat…just

as long as it wasn’t a requirement, and the other child though it was a great idea, but there was only one car seat in the house, and there you have it. The recipe for disaster…or at least a perceived disaster. And with that, two great friends, are at each other’s throats.

And then as quickly as it began, they are over it. Because toddlers or kids in general for that matter, never stay angry for very long. They explode in anger, and then something new catches their eye or occupies their mind, and they are friends again. Because after all, they really didn’t really want the sit in a car seat anyway. They hate those things! 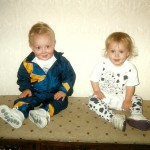 Christopher and Shai were best friends from the very beginning of their lives. They were born 1 day apart, cousins and friends. They shared so many things in those early days…mostly because they spent most of their days together at Shai’s house, because her mom, Amy, my daughter babysat Christopher. Those were special days, for all of us. The kids got loving care from mom/Auntie Amy, and Corrie, Christopher’s mom, my oldest daughter, and I got to go over at lunch and spend quality time with the kids and Amy. It just doesn’t get better than that. I will always treasure those early days spent getting to know my grandchildren well. They were the foundation for the great relationships I have with them to this day over 15 years later.

Watching the kids play and their friendship grow was wonderful, as well as interesting. As most of you know, the friendships of children go through many twists and turns. One minute they are best friends, and the next minute they are worst enemies, and the next, they are friends again. That was the case between Christopher and Shai. They played together so well most of the time, but there were just things that were not allowed, and moments when they both wanted to choke the other…and might have even tried…or at least tried to beat the other one up. These are just typical parts of the lives of children, and the source of many headaches for the parents and other adults. Those little territorial issues, “that’s mine” or “I had it first” are simply a part of life.

Most times there was a way to decide who had things first, or who it belonged to, but every so often, the only solution was to take the item away from both children. Of course that didn’t exactly 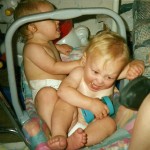 solve the situation. Not only did you still have both children crying, but now they were both blaming each other for being the one to start the whole fight in the first place. “If you had just let me have it, things would have been just fine” sort of comments rage back and forth at each other, until the parents, who have had enough of it, tell both kids to get away from each other. That solution usually solves the problem too, because the minute you tell them they can’t play with each other, that becomes the most important thing in the world. So, now all they can think of is playing with the very friend their parents have told them that they can’t, and they are friends again. Hmmmm…problem solved.