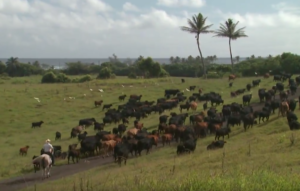 When I think of an island, exotic animals and birds everywhere. I might also think of snakes and other predators in the forests. It occurs to me that these things were not native to the area but were rather brought in by some ship. It makes perfect sense, because there is just no way these animals could migrate to an island. Still, there are animals on islands, like the Hawaiian Islands…in fact there are cattle herds on the Hawaiian Islands and a ranch called TIL Ranching. Maybe that shouldn’t surprise me, but it did.

TIL Ranching was started when Captain George Vancouver brought cattle to the islands that were under the rule of King Pai’ea Kamehameha. I’m sure most people would think of Vancouver, Canada. Of course, it was named after Captain George Vancouver, a British naval officer, but that is not the only thing he ever did. In 1793, Vancouver gave King Kamehameha five cows from California. He followed that gift with the addition of bull calves. All of these gifts were presented in hopes of cultivating cattle on the Hawaiian Islands. Longhorn cattle from Mexico arrived soon after, and Kamehameha issued Kapu to protect the animals. Kapu refers to the ancient Hawaiian code of conduct of laws and regulations. The Kapu system was universal in lifestyle, gender roles, politics, religion, etc. An offense that was Kapu was often a corporal offense, but also often denoted a threat to spiritual power, or theft of mana. Kapus were strictly enforced. In this case, the Kapu was that the cattle were not to be killed for food. The 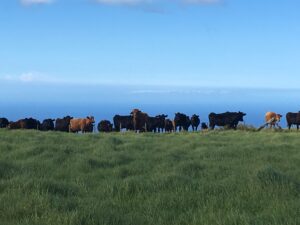 reason was that if the herd was going to thrive, they would need a few years without being butchered, so the herd could grow. When you think about it, that was an amazing gift.

Over the next few decades, there were cattle throughout the Hawaiian Islands. When the herds began to flourish, the Kapu was lifted, and products from the animals became important resources for islanders. When John Palmer Parker married the king’s granddaughter in 1816, he benefited from the increase of cattle, by receiving land and exclusive hunting rights from King Kamehameha. By the 1860s, the cattle were fully domestication and formal ranching was widespread. It’s amazing that from a couple of small gifts, a whole new industry was born.