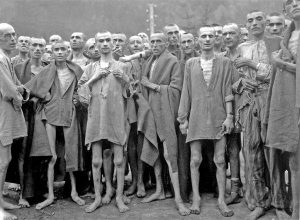 I read an article recently, that I can’t get out of my head. “A Study Finds 66% Of US Millennials Can’t Identify What Auschwitz Is” talks about the movement to remove certain elements from world history. The picture of Auschwitz is as foreign to kids these days as the idea of “The Final Solution” was prior to Hitler’s reign of terror in Germany and parts of Europe which led to the Holocaust. The thing that shocks me most is that when they were asked, after a tour of Auschwitz, which is located in Poland, why they didn’t tear these horrible buildings down, they responded, “Oh no!! We leave them up so that we will never forget what happened here, and never allow it to happen again.” Wise words, and words that more people would do well to remember today.

During the past year, we have seen unrest, protests, riots, and the “cancel culture” that has become almost the norm of our time. The schools don’t teach parts of history anymore, in an act of Historical Negationism or denialism. This is not about revising history based on new information that would correct history. Usually, the purpose of historical negation is to achieve a national, political aim, by transferring war-guilt, demonizing an enemy, providing an illusion of victory, or preserving a friendship. Sometimes the purpose of a revised history is to sell more books or to attract attention with a newspaper headline. The historian James M. McPherson said that negationists would want revisionist history understood as, “a consciously-falsified or distorted interpretation of the past to serve partisan or ideological purposes in the present” All of that sounds an awful lot like what we have going on today.

Couple Historical Negationism with “taking offence” or “political correctness” and you have a recipe for disaster. In many of the riots of recent days, the rioters have torn down our historical statues. To me, it doesn’t matter if they think the statue portrays someone they find offensive, or not. That person is a pert of history, good, bad, or ugly. A hero of the South, might not be a hero of the North, but to those in the South he or she might have been. Was a war hero from Germany any less a war hero to his countrymen, simply because he was forced to fight on the side of the Nazis? I don’t think so. In fact many of the German soldiers had no idea of what was happening in their own country. I’m not standing up for the rightness, nor against the wrongness of the people 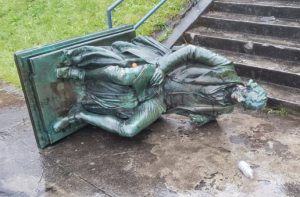 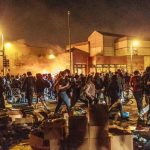 portrayed in the statues, but rather against the destruction of property. The buildings destroyed in the riots, the statues destroyed by the mobs, the looting that took place, all deemed “okay” because these places had insurance…does not make these vicious acts acceptable, or their perpetrators blameless. It’s time that we teach our children about patriotism, respect, fairness, and decency. If we don’t, we are going to find ourselves in the middle of a country that is destroyed by violence and hate. Wake up America!!