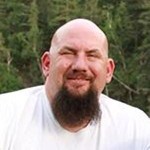 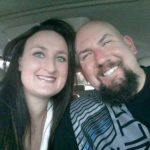 My nephew, Steve Spethman, who married my niece, Jenny Masterson, is a man who has done many things, and changed in many ways. I have known Steve since he was twelve years old, but not well. At that time he seemed like any other twelve year old boy, a little too careless, and far to sure that they are bulletproof. Some boys go on to become average guys, who are fortunate enough to grow to adulthood, in spite of themselves, but Steve really went on to become exceptional. Steve grew up with the knowledge that his family had served in the military and also with a dad who liked guns. So it was natural to expect that he would also like guns. I suppose that would really be an understatement in Steve’s case, because he loves guns. Steve and Jenny are both very much into guns, and have taught their boys, Xander, Zack, and Isaac to use them safely too. I know that their daughter, Aleesia will also learn to shoot when she is old enough. What I find particularly interesting is that Steve is also a gun builder and gun repairman. I would have no idea how to go about building or repairing a gun, but for Steve it comes naturally. And he has several guns that he built himself that are very cool guns.

Steve is a patriot in every aspect of the word. He is very loyal to this country, and the values it was founded on. The natural thing for Steve to do after high school was to join the National Guard. Like most military men, Steve doesn’t talk much about his military service. I know that sometimes, doing what you have to do, isn’t always pretty, and often no something the men and women can’t or don’t want to talk about, or even think about ever again, so they bottle it up inside. I don’t know if Steve saw any combat or not, so if not, maybe he just doesn’t think anyone would be interested, but I think we would. Steve loves war history, of any war, but has a special interest in World War II, as do I. He has countless movies and documentaries on the subject of wars, and especially the great battles of wars. I know the weapons of warfare are of great interest to him too. 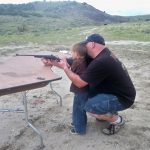 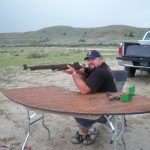 Steve’s number one priority is God, and following that, his family. He is very different from the boy I met when he was twelve. He is very different from the carefree kid who was quite sure he was bulletproof. Steve may not be bulletproof these days, but he is very protective of his family. And that says it all to me. Today is Steve’s birthday. Happy birthday Steve!! Have a great day!! We love you!!