Father Of The United States Navy 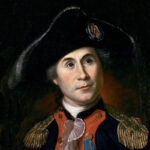 Pirates, as we know them, are criminals who hijack ships to rob them of anything of value on board. Sometimes however, a “pirate” can actually be working for the government, or at least on behalf of the government. Such was the case on April 10, 1778, when Commander John Paul Jones and his crew of 140 men aboard the USS Ranger set sail from the naval port at Brest, France. They headed toward the Irish Sea. Their mission was to begin raids on British warships. This was the first mission of its kind during the Revolutionary War. These missions weren’t called piracy, but when we compare the two acts, they pretty much were piracy. They just weren’t for personal gain, but rather for the good of the country and the war effort. No one was safe, not passengers and certainly not the crew.

Commander John Paul Jones, will always be remembered as one of the most daring and successful naval commanders of the American Revolution. John Paul Jones was born under the simple birth name of John Paul on July 6, 1747, in a small cottage in Arbigland, Scotland, to John Paul Sr and Margaret Paul. His dad was a gardener, but Jones found his calling not in gardening, but at sea. He earned an apprenticeship with the British Merchant Marine at the age of 13. His seafaring adventures would eventually take him to America and, like many other sailors before him, Jones got involved in the slave trade. However, the realities of human trafficking repulsed him, and he returned to shipping cargo duties.

1773 found Jones in a very difficult situation. He murdered a mutinous sailor on the island of Tobago in self-defense…which is not really murder, but maybe in those days things were different. Whatever the case may be, 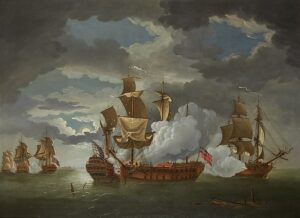 Jones believed he wouldn’t receive a fair trial, so he fled to America. It was there he added the last name “Jones” to conceal his identity. Jones needn’t have worried, because the American colonies were too busy stoking the flames of war with the British to have noticed his past. When the American Revolution broke out in 1775, Jones who remembered Britain’s cruel treatment of the Scots, decided that he would side with the colonists. He joined the new Continental Navy.

Jones began skillfully attacking British ships off the American coastline and expanded his operations from there. He first captained the USS Providence, set sail to Nova Scotia, and started capturing British vessels. Next, he took command of Ranger and set course to France, where his vessel was saluted by the French Admiral La Motte Piquet. It was the first American vessel ever to be recognized by a foreign power…pretty good for a new country. In 1779 Jones made history as one of the greatest naval commanders of the Revolutionary War. His shining moment came when, while En route to raid British shipping, Jones’ warship, Bon Homme Richard, came head to head with the more powerful English warship HMS Serapis off the North Sea. The battle went on for three hours between the two vessels. At one point, Jones slammed Bon Homme into Serapis, strategically tying them together. As the story goes, when the British asked if Jones was ready to surrender, he famously responded, “I have not yet begun to fight!” Inspired by Jones’ bravado, one of his naval officers tossed a grenade onto Serapis. The severe damage caused the British to surrender in the end. Jones’ became an 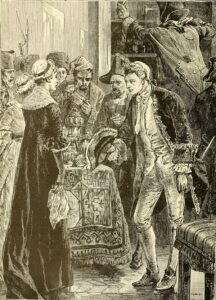 international hero. After the war ended, the Continental Navy dissolved due to lack of funds. Jones was dubbed the father of the United States Navy.

Jones retired to Paris, but his health took a turn for the worse. On July 18, 1792, he was found dead in his apartment at the age of 45. He was laid to rest in a French cemetery, but the plot of land was later sold and forgotten. Over one hundred years would pass before the United States was able to recover Jones’ remains with the help of French officials. After much research, his body was located and exhumed, and to the surprise of French pathologists, Jones’ body was excellently preserved. His initial autopsy concluded that the cause of his death was kidney failure, with later clinical studies believing his condition was exacerbated by a heart arrhythmia. The United States received Jones’ remains and buried them in a tomb inside the chapel of the U.S. Naval Academy in Annapolis, Maryland.