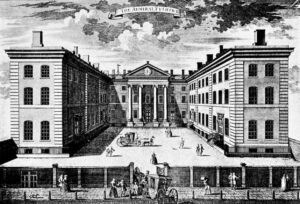 In a war, good intel is crucial. The opposing armies always use codes in messages so that their plans are not known. Breaking codes is not an easy task, nor is it a quick task. During World War I, the cryptanalysis section of the British Admiralty was called Room 40, also known as 40 O.B. (Old Building) (latterly NID25). The unit was formed in October 1914. It began when Rear-Admiral Henry Oliver, the Director of Naval Intelligence, gave intercepts from the German radio station at Nauen, near Berlin, to Director of Naval Education Alfred Ewing, who constructed ciphers as a hobby.

Ewing began recruiting civilians such as William Montgomery, who was a translator of theological works from German, and Nigel de Grey, who was a publisher. During the war, the war Room 40 decrypted around 15,000 intercepted German communications from wireless and telegraph traffic. The section’s most notable work was when they intercepted and decoded the Zimmermann Telegram, a secret diplomatic communication issued from the German Foreign Office in January 1917 that proposed a military alliance between Germany and Mexico. This was the most significant intelligence triumph for Britain during World War I, because it played a significant role in drawing the then-neutral United States into the conflict.

Room 40 operations began simply with the acquisition of a captured German naval codebook, the Signalbuch der Kaiserlichen Marine (SKM), and maps (containing coded squares) that Britain’s Russian allies had passed on to the Admiralty. Before long it was playing a vital part in the intelligence industry. It all started when the Russians seized this material from the German cruiser SMS Magdeburg after it ran aground off the Estonian coast on August 26, 1914. The Russians recovered three of the four copies that the warship had carried. They retained two and passed the other to the British. In October 1914 the British also obtained the Imperial German Navy’s Handelsschiffsverkehrsbuch (HVB), a codebook used by German naval warships, merchantmen, naval zeppelins and U-Boats. The Royal Australian Navy seized a copy from the Australian-German steamer Hobart on October 11th. Then, on November 30th, a British trawler recovered a safe from the sunken German destroyer S-119, in which was found the Verkehrsbuch (VB), the code used by the Germans to communicate with naval attachés, embassies and warships overseas. It was an amazing find. In March 1915 a British 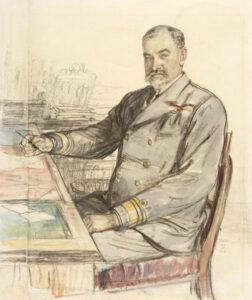 detachment impounded the luggage of Wilhelm Wassmuss, a German agent in Persia and shipped it, unopened, to London, where the Director of Naval Intelligence, Admiral Sir William Reginald Hall discovered that it contained the German Diplomatic Code Book, Code No. 13040.

The section retained “Room 40” as its informal name even though it expanded during the war and moved into other offices. Alfred Ewing directed Room 40 until May 1917, when direct control passed to Captain (later Admiral) Reginald ‘Blinker’ Hall, assisted by William Milbourne James. Although Room 40 successfully decrypted Imperial German communications throughout World War I, its function was compromised by the Admiralty’s insistence that all decoded information would only be analyzed by Naval specialists. This meant while Room 40 operators could decrypt the encoded messages they were not permitted to understand or interpret the information themselves. Whatever they couldn’t do, they accomplished a very great deal.