Bob and I went out to see his mom at the nursing home tonight. We had been out of town for the long weekend, and so had not seen her in several days. It is my usual practice to ask her if she knows who we are, and if she does, I know it’s a pretty good day. Then we can keep the conversation a little lighter. Tonight I told her that Bob and I had gone to Denver for the weekend, and that he picked on my all weekend. As usual for he, she gave him a “you’re a bad boy” look. I told her that I brought him out to see her so she could straighten him out for me. She wasn’t sure how I expected her to do that until I reminded her of something she used to say quite a bit, and not so many years ago.

She would say it whenever Bob was being particularly “bratty” or picking on someone such as his wife, who we all know would never be picking on him, because I’m just not that kind of person. Oh ok…so maybe I am, but we all know that when it comes to a choice between a poor little picked on girl and a big strong bratty guy, the girl will win every time. That was kind of the world Bob grew up in, and it isn’t likely to change now. 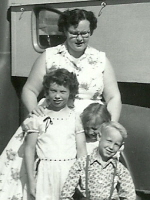 Whenever Bob was teasing me, she would tell me that she “should have given him a few more spankings” and then maybe he would behave better. It was a standing joke between us, because we both knew that Bob was a good man, and his teasing was all in fun, and something he and I both did. In fact, I was teasing him when I asked her to make him behave. The one thing that comment always did was to put a smile on everyone’s face. In my mind I could picture young Bob teasing one of his sisters…usually Jennifer, and my mother-in-law pretty much at her wits end, and Bob getting that one spanking that might have made the difference between the teasing, funny guy I know and love, and a more serious version that I know would never be a better version. I guess that when it comes down to it, I’m glad she didn’t spank him a few more times.