Tornado On The Trail 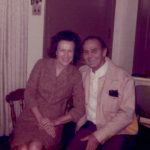 Saturday afternoon, after hiking the Bridle Trail on Casper Mountain, Bob and I went up to hike the Braille Trail with our daughter, Corrie Petersen, her husband Kevin and her son, Josh. Black out glasses were provided to give a sighted person an idea of what it is like to travel through life blind. Josh and I decided to hike that way, and what an experience that was. I must say that Blind Man’s Bluff will not prepare you for the reality of going through life blind. I have a lot of respect for any blind person who gets out and lives their life on their own terms. It would take a lot of courage. Of course, since I cannot read Braille, we took off the glasses at each sign that told about the area. It was very interesting to hear about the rocks, trees, the creek, and plant life we were seeing around us.

Then, we read the sign about the tornado that had torn through the Braille Trail in 1978. My memory files immediately took me back to July 20, 1978 at 6:40pm. No, I didn’t know that July 20th was the exact date or that 6:40pm was the exact time, but I’m quite sure it was. My Aunt Ruth Wolfe and her family had come to town to celebrate my parents’ 25th Wedding Anniversary, which was July 18, 1978. The memory was so vivid in my memory files that I can clearly see my Aunt Ruth standing in my parents’ kitchen. Suddenly, she stopped talking and almost ran to the back door. She said, “There’s a tornado somewhere!” She was so serious, but I was still skeptical…until we heard that there had indeed been a tornado on Casper Mountain at that exact time. I was stunned. How could she have known that? I was a young mother of two girls then, and had never been around a tornado. Casper doesn’t get a lot of them, even though we have had warnings, and even tornadoes in the area. Casper Mountain gets even fewer tornadoes than the main Casper area. Still, my aunt, who had been around a few of them, knew the atmospheric changes that precede a tornado, and she was certain that one had struck somewhere in our immediate area.

Now, over 38 years later, while walking a trail on the mountain, that whole scene replayed in my mind. Life is strange that way. Sometimes, memories come in and out of your life like you are watching a movie. It seemed so real that I felt like I could have walked across the room and touched my aunt. I remembered always being 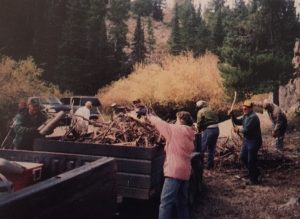 amazed at the wisdom she had concerning tornadoes. In reality, all of my parents siblings were that way. They had the wisdom that comes with their years on the earth. That was how Aunt Ruth got her wisdom too…living life. It was a great memory of her. As to the Braille Trail, since it had the dedication of the Lions Club and the community, the people came together, cleaned it up, and repaired the damage. The Braille Trail has been damaged a total of three times over the years of its existence…the 1978 tornado, the 1985 flood, and the 1995 winter storms, each time the damaged trees were removed, and the trail areas rebuilt, so that the trail could continue to serve the visually impaired and the community at large. I know I will definitely go back again.