A Surprise Of His Own 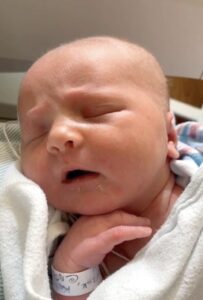 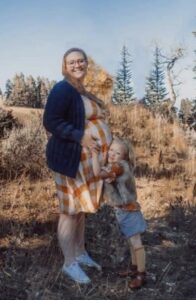 Babies are always so much fun, and that is what my great grand-niece, Reece Balcerzak is about to find out, as she gets ready to meet her new little brother, Aysa Bruce Bowen Balcerzak, who made his appearance on November 8, 2021. Aysa weighed 7 pounds 5 ounces, and he was 19 inches long. Aysa was a little more cooperative than his big sister, in that he only arrived Just over two weeks early, while his big sister arrived just over two months early, after her mom and dad stayed at Presbyterian Saint Luke’s Hospital in Denver for two weeks trying to buy a little bit of time for baby Reece. Then she had to be in the hospital in Denver for the next 60 days before she was big enough and healthy enough to go home. With the problems his big sister had, Aysa’s parents were a little apprehensive when they found out they were pregnant again. They had just about decided that they would a “one and done,” as little Aysa’s daddy, Keifer Balcerzak said, when Aysa’s mom, Katie Balcerzak told his daddy that she was pregnant. They were excited, but also a little worried that they would have a repeat of their daughter’s birth. In the end, Aysa wasn’t in quite as big a hurry to get here as his sister was…thankfully.

Aysa is a sweet little boy who is a joy to his parents, but in the beginning the early tests said that he was going to be a girl. His parents began preparing for a second daughter, and then…when the ultrasound was done, Aysa had pulled off a surprise of his own. I guess, that his surprise was a little easier to deal with that Reece’s had been, because hers was downright dangerous, while his was a few little changes. I mean, you can’t go around putting your little boy in little girl clothes. Well, I guess you could, but he might not appreciate it down the road when the family albums come out, and here he is in a frilly pink dress. No, that would just never do. Aysa would need boy clothes, so the baby shower gifts would have to be exchanged. Boy clothes these days, are just as cute as girl clothes, so it will be fun for his parents to dress him up too. It used to be that boys got plain pants and a plain shirt, but now they get trucks, puppies, and tractors on their clothes, along with other animals and vehicles too, so the clothes are cool, and Aysa’s parents will have lots of fun with his outfits too.

Aysa and his parents are still in the hospital at this point, because Katie had a C-section delivery, and with

Covid restrictions, Reece has only seen her baby brother via video chat. At this point, she thinks he is pretty cool and she can’t wait to hold him. Her mom is hoping that stays that way. As we all know, when a baby comes home the older sibling is usually excited, until the baby starts crying or needs a stinky diaper changed. After that, they sometimes want to send that baby back. Hahahaha!! Nevertheless, even though the older siblings sometimes have a little “buyer’s remorse” initially, they usually find that they really love their new baby and being the big sister or big rother is really a very cool thing. Reece is such a smiley girl anyway, that I think she will have no trouble helping her little brother smile too. I’m so excited for the whole family, and I can’t wait to meet baby Aysa Bruce Bowen Balcerzak in the near future. Congratulations to Katie, Keifer, Reece, and the whole family!!