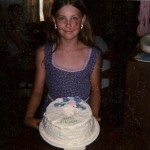 I know many of you think this story is about a stock market crash, but this is a story about a different kind of crash. Bicycle helmets are a relatively new item, that was unheard of when I was a kid. They first began making them in about 1975, but weren’t very protective, They began improving them in the mid 80’s, but were rarely used. That said, it is safe to say that my girls grew up, just like their parents, not using a helmet when riding a bike. We weren’t considered negligent at that time. That was the way everyone rode their bicycle.

It was the summer of 1986, and almost the end of June. My daughter, Corrie would turn 11 on June 30th, a birthday she shared with her great grandmother. Like most kids, in the summertime, Corrie’s mode of transportation was her bicycle. We lived out in the country, and the road in front of our house was not a busy street, so my girls and their friends rode their bicycles there for hours each day. A few days before Corrie’s birthday, I was in the house while the kids played outside. Suddenly, I heard a blood curdling scream, and then another smaller scream. I ran outside, to find Corrie’s friend running to get me, tears streaming down her face, yelling, “Corrie wrecked her bike!!”

I ran out to Corrie, to find her bleeding from her face, and I don’t mean her nose. The scrape looked really bad, but I could tell that it would not need stitches. I did think there was a definite possibility that she would have a scar on her face. My heart sank. I hated to think of her having a scar for life. I prayed inwardly, so I wouldn’t scare her, and asked God to please heal her face without a scar. Since she hit her face, I watched for all the usual signs of concussion, but nothing ever came of that. Nevertheless, she was very upset. 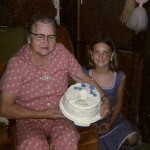 She was horrified that she would look awful on her birthday and in the pictures that would be taken…typical of a soon to be 11 year old girl.

She survived the horror of having her picture taked with a scab on her face, and her face healed with no scarring, for which I praise God. The birthday party went on, in spite of the scab, and this story has a happy ending, but the moral of the story is this: To avoid your own crash story like this one, I recommend that you and your kids wear a bicycle helmet. While it won’t necessarily save you from the crash, it might save your face from the scabs and scars.