The Second Battle Of Kharkov 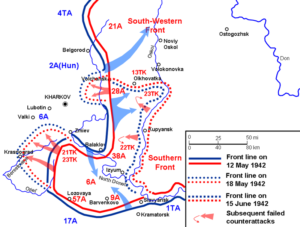 On May 12, 1942, Soviet forces under the command of Marshal Semyon Timoshenko attacked the German 6th 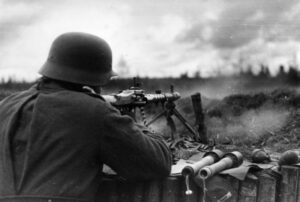 Army from a vulnerable point established during the winter counter-offensive. After a promising start, the offensive was stopped on May 15th by massive airstrikes. There were a number of critical Soviet errors by several staff officers and by Joseph Stalin, who failed to accurately estimate the 6th Army’s potential and overestimated their own newly raised forces, facilitated a German pincer attack on May 17th which cut off three Soviet field armies from the rest of the front by May 22nd. The Soviet Army was hemmed into a narrow area, and the 250,000-strong Soviet force inside the pocket was exterminated from all sides by German armored, artillery, and machine gun firepower, as well as 7,700 tons of air-dropped bombs. After six days of encirclement by the German Army, the Soviet resistance ended as their troops were killed or taken prisoner. It was a devastating loss for the Soviets.

The Counter-offensive of the Second Battle of Kharkov, was called Operation Fredericus, and was launched by the Axis forces in the region around Kharkov against the Red Army Izium bridgehead offensive, and was conducted from May 12 to May 28, 1942, on the Eastern Front during World War II. The objective was to 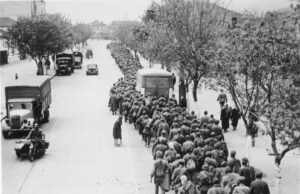 eliminate the Izium bridgehead over Seversky Donets, also known as the “Barvenkovo bulge,” which was one of the Soviet offensive’s staging areas. A winter counter-offensive drove German troops away from Moscow, but depleted the Red Army’s reserves. The Kharkov offensive was next Soviet attempt to expand their strategic initiative, although it failed to secure a significant element of surprise. The battle ended up being an overwhelming German victory, with 280,000 Soviet casualties compared to just 20,000 for the Germans and their allies. The German Army Group South pressed its advantage, encircling the Soviet 28th Army on June 13 in Operation Wilhelm and pushing back the 38th and 9th Armies on June 22.