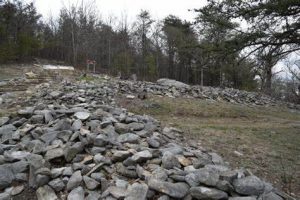 I am always amazed when a structure stands so long that no one can remember how it came to be. At the southern end of the Appalachian Mountains, there is a small range called the Cohutta Mountains. One mountain in that range is called Fort Mountain. It gets its name from the remnants of a stone formation located on the peak. It has been determined that the structure is ancient, and some sources have indicated that it was possibly built around 400-500 AD, while other sources will not commit to any age. I suppose that the very age of the structure would give good reason as to why it’s origins are unknown.

The zigzagging structure is about 885 feet long, and up to 12 feet thick. It stands up to 7 feet high, but many of the sections are only two to three feet high. The wall, which is scattered with 29 pits, cairns, small cylinders, stone rings, and ruins of a gateway, has stood in its place against all odds. It has stood the test of time, weather, gravity, and even people to continue to stand in its place, high on a mountain peak today.

There are several theories as to who might have built this wall. Some people who found the wall very early on called the structure a fort. They speculated that Hernando de Soto might have built it to defend against the Creek Indians around 1540. This theory was disproven when as early as 1917, when a historian pointed out that de Soto was in the area for less than two weeks. That wouldn’t have been enough time to build a structure that was going to stand the test of time. 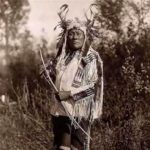 Cherokee came to the area during the late 1700s. The people were said to be called “moon-eyed” because they saw poorly during the day and could see very well at night. It is said that they were small in stature, possibly midgets or dwarfs. The men wore beards, and the people were light-eyed, with very pale white skin. One early historian suggested that they might have been albinos…possibly the ancestors of the Kuna people of Panama, who have a high incidence of albinism.

It is said that the Cherokee Indians drove them out of the region. Some say that these people built the ancient structures in the area. They thought the structure might have been a temple. The “moon-eyed” people were first mentioned in a 1797 book by Benjamin Smith Barton. Later documentation tells of similar accounts, such as an 1823 book, The Natural and Aboriginal History of Tennessee, which tells of a band of white people who were killed or driven out of Kentucky and West Tennessee. Apparently these people, especially if they were albino, scared the Cherokee. I suppose they might have thought they were evil spirits.

So…who were these “moon-eyed” people? Some say they might be of Welsh descent. There is a story that insists that a prince named Madoc (or Madog) ab Owain Gwynedd, fled his homeland after the death of his father, which had created a Civil War among his seven sons. The sons were supposed to fight to determine who would rule their father’s lands. Now, that is something I can’t imagine. Apparently Madoc did not want to fight, so he set sail with his brother Rhirid and a few followers in 1170 and was said to have landed somewhere around Mobile Bay, Alabama. Later, Madoc returned to his native country and recruited more followers who returned on ten ships to settle in America. After sailing the second time, they were never heard from in Wales again. There are other walls thought to be built by these colonists. A wall near DeSoto Falls, Alabama is nearly identical to the setting, layout, and method of construction of Dolwyddelan Castle in Wales…the birthplace of Madoc. Minor fortifications in the Chattanooga, Tennessee area are also attributed to these Welsh people. 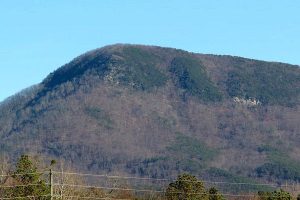 The true answer still lies buried in the past and may never be known. Current legends tell that the sounds of distant drums, flickering lights, and the images of men wearing bearskins have been encountered along the collapsed wall. I find that hard to believe, but I can understand how people can imagine many things. I am just not someone who believes in ghosts. Today, the mysterious peak is part of the Fort Mountain State Park. It’s known for more than the mysterious wall. It is also known for its unique scenery, a mixture of both hardwood and pine forests, as well as, several blueberry thickets. The park contains a beautiful 17 acre mountain lake.