Twelve years ago today, our world was changed forever. In my remembrance and that of all living Americans, there has never been never been such an attack…here, on American soil…until September 11, 2001. That day will live in the memories of all the American people who were old enough to remember it, and any who have been told very much about it since. I have to wonder about the people born since that time. Will they understand what that day is all about? Or will they simply see it in the way most of us see things like the Civil War or the American Revolutionary War? Both were events that took place here in America so very long ago, fought on American soil, and yet, they seem more like a storybook event than a real event that is such a big part of our history. I don’t know how that could have been 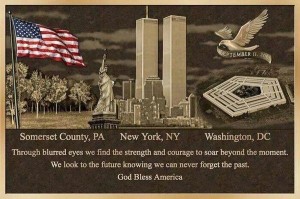 changed in the years following those wars, but with our technology, we should be able to keep the memory of the terrorist attacks in the front of our children’s thoughts, so that as they grow, we don’t lose sight of what the evil in this world can bring about.

I did not know anyone who lost their life on 9-11, but I did know someone who could have been in the middle of that whole thing. My daughter’s friend, Carina, who has been like a third daughter to me since they were in Kindergarten, was a flight attendant during that time with Continental Airlines, based out of New Jersey. She was sick that day, and so was not flying. That did not alleviate her parents’ concerns, because they didn’t know that she was not flying and they 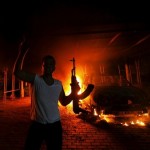 couldn’t get a hold of her, because she had turned her phone off. When we knew that she was safe, we all gave a sigh of relief. It is a feeling of relief that we will never forget.

Now twelve years later we are again remembering a horrible terrorist attack against our nation, this time in Benghazi. Our government became too complacent about our safety both here and abroad, and again…people died…on a day when we should have been watchful!!! It is an atrocity!! When will we learn that we cannot forget. There is so much evil in this world and we must remain watchful, or we will be attacked again. Today, I pay tribute to those lost in all of these attacks, and to those who gave their lives trying to help others. Rest in peace.