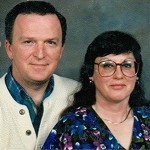 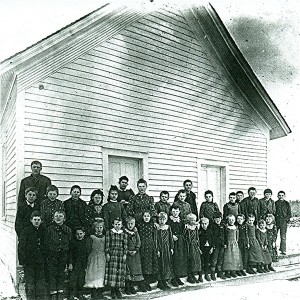 She Had A Way 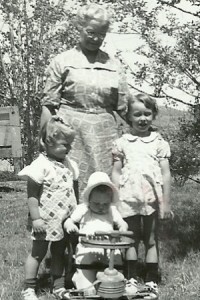 Bob’s great grandmother was a truly amazing woman. She lived to be 97 years young…and she lived at home. She just never seemed to age. She loved them, and she was patient with them. She didn’t mind their play, and in fact, she loved it, noise, mess, and all. She loved their laughter, and she laughed with them. Many older people get grouchy and don’t like noise, but she loved it when kids were involved.

I first met Great Grandma Knox when she traveled from her home in Yakima, Washington to Casper, Wyoming with he husband Edgar, her son Frank and his wife Helen. She was such a sweet woman. I enjoyed talking with her immensely, so I can totally understand why the kids all loved being with her. She was blessed enough to spend time with 4 generations of her offspring, from her children to her great great grandchildren…or was it her offspring that was blessed. I tend to think the latter, because Grandma Knox just simply had a way with kids.

When Bob and I went up to visit her in September of 1976, just a month after Grandpa passed away, she still had a gentleness of spirit, and the ability to enjoy her great great grandchildren, my daughters, Corrie and Amy. A number of years later, she would again travel to Casper 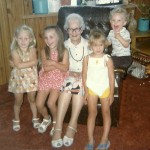 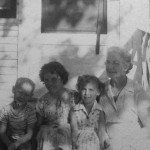 to see the remainder of the grandchildren born during her lifetime. The kids had such a great time. Again, I marveled at how she took such great pleasure in the laughter and play of her great great grandchildren, just as she had her children and grandchildren. The kids giggled and played, running around the house, like they always did when they were together, and instead of seeming annoyed, Grandma Knox seemed delighted. I suppose that is the reason the kids were still smiling in the pictures we took. It was because she had a way with kids and they truly loved her.

Sometimes…when we least expect it, or maybe when we just weren’t looking, it occurs to us that those we love are getting older. Little problems begin to present themselves, that throw us for a loop. We begin to wonder how we could have missed the fact that someone is really in their early 80’s. I mean, we know their chronological age very well, but somehow their physical age sneaks up on us, and takes us very much by surprise.

That is exactly what happened to me last Monday, with my father-in-law, and we spent the rest of the week with him in the hospital, while we waited to see if the racing heart rate that his foot doctor caught was going to be problematic, or just a result of the Pneumonia that he was also diagnosed with. Like my own dad, my father-in-law had always seemed much younger that his years, so suddenly being faced with something that could be a life or death situation, just about knocked me over, as did the possibility of losing the first line caregiver for my mother-in-law.

The diagnosis came, and we will be dealing with A-Fib for the rest of his life, but since my mom has that, I know it is manageable. The Pneumonia is pretty much gone, and he came home from the hospital today. He would like to think that he can just go back to life as usual, but for me, much has changed. Yes, he was on oxygen before, and weak in that way, but the rest of him was always strong and able to handle the majority of the care of my mother-in-law, but now…I have to consider that the stress of caring for an Alzheimer’s patient might be too much for him. Still, he has not come to a place where he is ready for her care to take a different turn, and we will honor his wishes concerning that decision. And, we aren’t ready for that change either.

So, we will modify the plan for now, until we know where we stand in this situation, and home health care will help with the day to day care for both of them. And we will see where the future will take us. In the case of my mom, the meds control her A-Fib quite well and she can do pretty much what she wants to. I pray that my father-in-law will be with be the same, and that the sudden changes that have come about will be able to return to at least some semblance of normalcy.