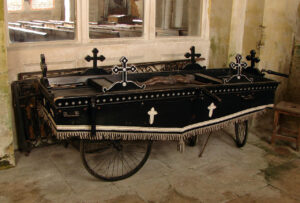 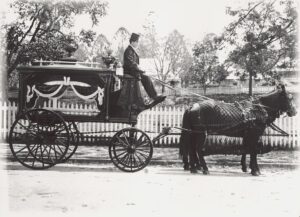 When the first cemeteries were set up, there were no automobiles, so the casket was transported by a horse or ox drawn wagon. This wasn’t exactly a luxury final ride to the final resting place, but I suppose the “honored guest” didn’t know the difference. Sometimes, when the deceased had lived way out in the country, the family chose to bury them on the property, but when they didn’t, the ride to the final resting place was a long one, and rather hard on the families, because it left so much time to just think. In many of these cases, the family had to build a casket before they could bury it. Planned funerals were very unusual. People didn’t often go to the undertaker and sit down to figure it all out, so the casket was also not planned. It gives a whole new perspective to the reason for waiting several days for the burial. We think there is a lot to plan these days…not really so much. 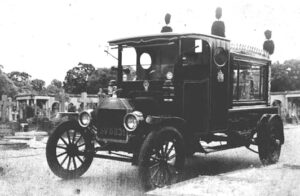 Hearses were originally “hand-drawn then horse-drawn after the decoration and weight of the hearse increased. The first electric motorized hearses were introduced to the United States in the early 1900s. Petrol-powered hearses began to be produced from 1907 and, after a slow initial uptake due to their high cost, became widely accepted in the 1920s. The vast majority of hearses since then have been based on larger, more powerful car chassis, generally retaining the front end up to and possibly including the front doors but with custom bodywork to the rear to contain the coffin.” On January 15, 1909, came the first use of an automobile hearse in a funeral.

While the first hearse was quite different from the hearses of today, it was really quite ornate. The hearses of today, might seem normal and average, but in some instances, they can be quite unusual too. One hearse I found, really surprised me. If you happen to be a motorcycle fan, you might be interested to know that there is actually a motorcycle hearse. It is a one rider affair, with a very interesting “sidecar” to hold the casket. It is a 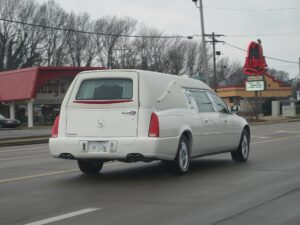 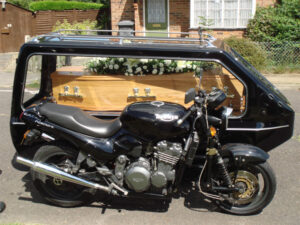 far cry from the original horse-drawn version, and definitely different from the hand cart version. While funerals these days are unique to the deceased, and that is what makes them beautiful, they were often very plain in times past. Everyone pretty much had the same service with the same songs, and the same words spoken. These days, funerals…planned mostly by the family, are very personalized, sometimes right down to the type of hearse.