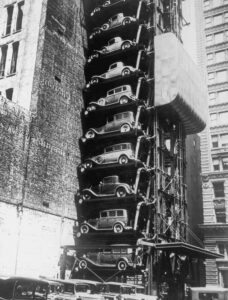 In 1932 Chicago was a city that was on the cutting edge of things, including car ownership. It wasn’t that everyone owned a car, but enough people did that there was beginning to be congestion problem where parking is concerned. It was especially bad for apartment buildings in the city. the people owned a car, but now they had to park so far away that they might as well not own a car. If they weren’t the first one home, they didn’t get to park close.

Enter the Car Parking Machine. Built by Westinghouse Electric and Manufacturing Company, the system took up the space of six cars at its base, but it held 48 cars. There are numerous compartments in the machine, and they are moving constantly in a vertical direction, like a car elevator. The system was run by an attendant, and when

they put a car in a slot, the machine moved it to the next open slot. When the car owner wanted his car back, the attendant rotated the structure until the right car was down, and then backed the car out for the owner, just to be safe.

The system was such a new phenomenon that they even came out with a short film about it called ‘Vertical Auto Park Solves Problem of Windy City.’ The film shows cars being driven in cages on conveyors that rise in a Ferris Wheel like manner. People look on as cars are carried by a 105-foot-high elevator that parks 48 cars in an area of 16 by 24 feet. It was filmed on location in Chicago, Illinois and aired on April 25, 1932. The Vertical Automatic Parking Lot was actually first tested in East Pittsburgh, Pennsylvania 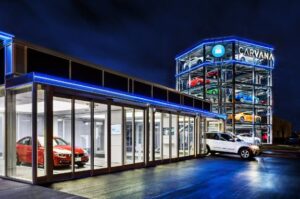 before being set up as a commercial enterprise in the Chicago Loop during 1932.

While the system is really quite old, it isn’t necessarily out of date. For example, look at the latest way to buy a car…Carvana. While the purpose of the elevator system is different, the idea is still the same. You find your car online, and then you can go to the car vending machine to get your car. Just like the old system, your car takes a ride in the elevator to get to you. When you think about it, the system was a good one, and should probably be used in more places. Parking congestion is an ongoing problem, after all.