Rats In The Trenches 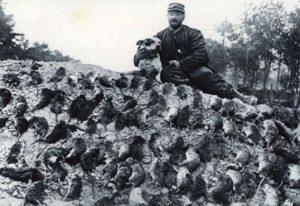 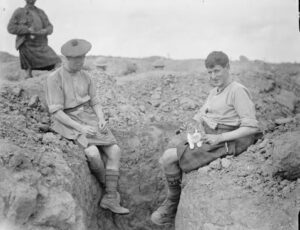 Trench warfare is a type of land warfare using occupied lines largely comprising military trenches, in which troops are well-protected from the enemy’s small arms fire and are substantially sheltered from artillery. That doesn’t protect them from many other weapons, like tanks, bomber planes, and some things that seem far more benign…rats and disease, not that these things aren’t dangerous. In fact, during World War I, these seemingly benign pests were becoming a deadly problem. Trench foot was one of the biggest disease problems, due to the wet and dirty conditions the men basically lived in.

The rats…well, they were a bigger problem. The fact that the men “lived” in the trenches meant things like human waste, food scraps, and dead bodies drew the rats, and rats spread disease like typhus and the plague, 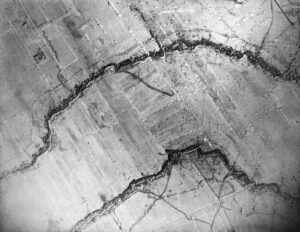 which made the problem of disease more deadly. Since trash disposal wasn’t easy in the trenches, the men often threw empty food tins out of the trenches at night. Then, the rats could be heard turning the tins over and licking the last tidbits out of them. For me the whole scene would be enough to make me want to run screaming from the scene, but that could get a soldier killed. Something had to be done…and done quickly. Due to the plentiful amount of food, some of these rats grew quite large in size. One story tells of a soldier who spotted one the size of a cat.

Something had to be done, so French troops tried to control the rat problem by bringing terrier dogs into the trenches with them. The plan was to let the dogs catch and kill rats, and it quickly became an interesting way to pass the time during daylight hours. Because of the dangers presented by the rats, the military actually offered soldiers a reward for killing the rats as incentive to decrease their numbers. It was a great idea, but not really practical, because rats are notoriously great escape artists…at least from humans. Nevertheless, apparently the troops got so into the 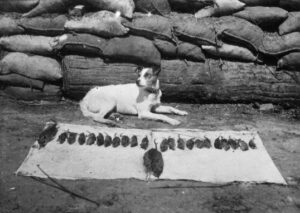 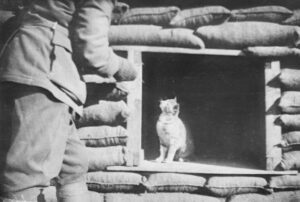 game, with one army corps managed to catch 8,000 in a single night. Other soldiers adopted cats instead of dogs, and it’s believed around 500,000 cats helped out in the trenches over the course of World War I. Many of the cats, and some of the dogs, ended up serving as mascots for troops on the front lines as well as hunters. I guess the plan worked, but maybe the animals should have been given a medal too.