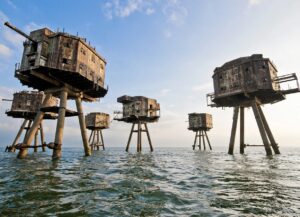 At the mouths of the Thames and Mersey rivers in the United Kingdom, you can still see what amounts to the remains of the Maunsell Forts. These forts are armed towers built during the Second World War to help defend the United Kingdom. At that time, they were operated as army and navy forts. They were named after their designer, Guy Maunsell. When the war ended, so did the need for the forts, and they were decommissioned in the late 1950s. They weren’t torn down, however, and were later used for other activities, including pirate radio broadcasting. Later it was found that they were not really stable enough for use, and the broadcasting stopped.

The Maunsell naval forts were built in the mouth of the Thames and operated by the Royal Navy. Their purpose was to deter and report German air raids following the Thames as a landmark and prevent attempts to lay mines by aircraft in this important shipping channel. There were four naval forts: 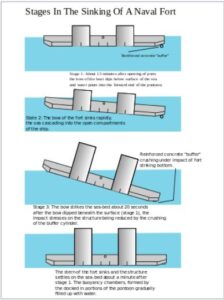 Rough Sands (HM Fort Roughs) (U1), Sunk Head (U2), Tongue Sands (U3), Knock John (U4). In reality it was an artificial naval installation, and it is similar in some respects to early “fixed” offshore oil platforms. “Each fort consisted of a rectangular 168-by-88-foot reinforced concrete pontoon base with a support superstructure of two 60-foot tall, 24-foot diameter hollow reinforced concrete towers. The walls were roughly 3.5 inches thick. The overall weight of each fort is estimated to have been approximately 4,500 tons. Everything was a useful space. The twin concrete supporting towers were actually divided into seven floors. Four of the floors were used for crew quarters. The rest of the floors were used for dining, operational, and storage areas for several generators, and for freshwater tanks and anti-aircraft munitions. There was a steel framework at one end supporting a landing jetty and crane which was used to hoist supplies aboard. The wooden landing stage itself became known as a ‘dolphin.'” A dolphin is “a group of pilings arrayed together to serve variously as a protective hardpoint along a dock, in a waterway, or along a shore; as a means or point of stabilization of a dock, bridge, or similar structure; as a mooring point; and as a base for navigational aids.” 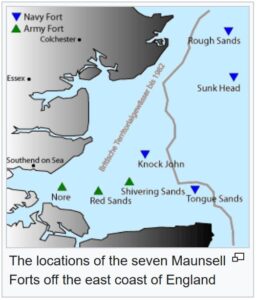 “The towers were joined together above the waterline by a steel platform deck. Other structures could be added as needed. That area was also the gun deck, on which an upper deck and a central tower unit were constructed. QF 3.7 anti-aircraft guns were positioned at each end of this main deck, and two Bofors 40 mm anti-aircraft guns and the central tower radar installations atop a central living area that contained a galley, medical, and officers’ quarters. The design of these concrete structures is equal to a military grade bunker, due to the ends of the stilts, (under water) that are solidly locked into the ground. They were laid down in dry dock and assembled as complete units. They were then fitted out, and the crews went on board at the same time for familiarization, before being towed out and sunk onto their sand bank positions in 1942.” They also had some unexpected uses. Many species of fish live near the forts because the forts create cover…who would have thought about that. The forts have also provided landmark references for shipping…an added perk.