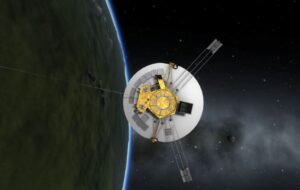 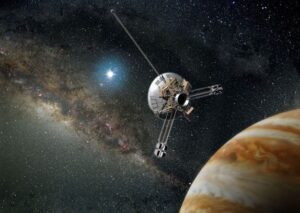 Many of us have seen shows about a spacecraft that got lost in space and is seen wandering around trying to make their way back. Of course, those shows are fiction, but if you were going to explore beyond our galaxy, you would most likely need to send some sort of probe or spaceship out into the far reaches of space to see what it’s like out there. If the empty probe can’t function out there, it’s very likely not a good idea to send a manned spaceship out there. That is what Nasa figured anyway, and so in 1972, Pioneer 10…originally designated Pioneer F, was launched into space. Pioneer 10 is an American space probe, manufactured by TRW Inc. It isn’t overly heavy, weighing just 569 pounds. Its first mission to the planet Jupiter was completed with its closest approach happening on Dec 3, 1973. At that point, Pioneer 10 became the first of five artificial objects to achieve the escape velocity needed to leave the Solar System. At that point, it became part of a space exploration project that was conducted by the NASA Ames Research Center in California.

“Pioneer 10 was assembled around a hexagonal bus with a 9-foot diameter parabolic dish high-gain antenna, and the spacecraft was spin stabilized around the axis of the antenna. Its electric power was supplied by four radioisotope thermoelectric generators that provided a combined 155 watts at launch. Pioneer was launched on March 2, 1972, by an Atlas-Centaur expendable vehicle from Cape Canaveral, Florida. Between July 15, 1972, and February 15, 1973, it became the first spacecraft to traverse the asteroid belt. Photography of Jupiter began November 6, 1973, at a range of 16,000,000 miles, and about 500 images were transmitted. The closest approach to the planet was on December 4, 1973, at a range of 82,178 miles. During the mission, the on-board instruments were used to study the asteroid belt, the environment around Jupiter, the solar wind, cosmic rays, and eventually the far reaches of the Solar System and heliosphere.”

I find it hard to believe that Nasa thought that the spacecraft would last as long as it did, but I suppose that the further out it went in space, the less it would encounter the kind of space debris that came from Earth. Still, there are meteors and planets, stars that it could be pulled into, and so many more things that could have meant the destruction if the craft. Nevertheless, Pioneer 10 continued to send out radio transmissions continued between Nasa and itself until January 23, 2003, and then only because of the loss of electric power for its radio transmitter. At that point, the probe was at a distance of 12 billion kilometers (7,456,454,306.848 miles) from Earth. 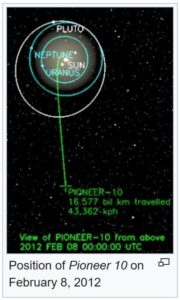 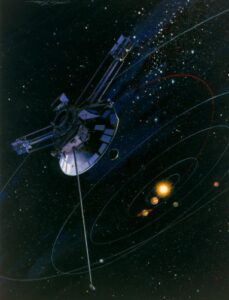 According to sources, “If left undisturbed, Pioneer 10 and its sister craft Pioneer 11 will join the two Voyager spacecraft and the New Horizons spacecraft in leaving the Solar System to wander the interstellar medium. The Pioneer 10 trajectory is expected to take it in the general direction of the star Aldebaran, currently located at a distance of about 68 light years. If Aldebaran had zero relative velocity, it would require more than two million years for the spacecraft to reach it. Well before that, in about 90,000 years, Pioneer 10 will pass about 0.23 parsecs (0.75 light-years) from the late K-type star HIP 117795. This is the closest stellar flyby in the next few million years of all the four Pioneer and Voyager spacecrafts, which are leaving the Solar System.”