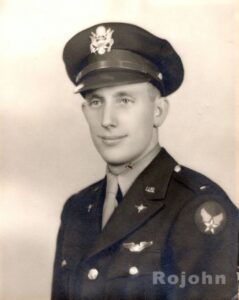 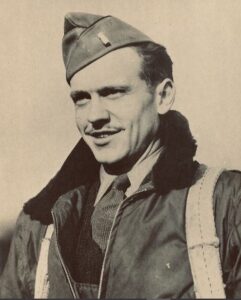 Because my dad, Allen Spencer was the flight engineer and top turret gunner on a B-17G in World War II, the B-17 has always held my interest. The plane was practically indestructible because of its great flying characteristics, resistance to combat damage, and fierce defensive firepower. Built by Boeing, it was called the B-17 Flying Fortress and it was the backbone of the American bomber force in Europe. In the European Theater of World War II (1939-1945), “one of the most dangerous occupations for Allied soldiers, sailors, or airmen was the flying of strategic bombers.” That was a statement that surprised me a little, because I would have expected the men on the ground to be in far more danger. I knew that there was a time my dad had to hang out of the open bomb bay doors to crank the landing gear down when they were damaged in combat, and I vaguely recall that they lost a ball turret gunner when he was wounded in battle and, while they pulled him out to render aid, they couldn’t save him.

What I didn’t know about was something that happened on January 1, 1945, that was so bizarre that it seems like a ‘tall tale’ more than an actual event. Nevertheless, it was an actual event, and it was shocking. On that day, the Flying Fortress and the men who flew them were going to be tested beyond any limits they could have imagined, and beyond anything they were trained for. During a chaotic battle complete with ferocious anti-aircraft gunfire (flak) and enemy fighters, two B-17 Bombers managed to collide. A B-17, number 43-338457, piloted by 1st Lieutenant William G MacNab and 2nd Lieutenant Nelson B Vaughn, had risen upward. The top turret guns on MacNab’s plane had pierced through the aluminum skin on the bottom of 1st Lieutenant Glenn H Rojohn’s B-17, number 42-231987, binding the two huge planes together, as Rojohn’s co-pilot 2nd Lieutenant William G Leek, Jr said, like ‘breeding dragonflies.’ The two planes had become one. Upon impact, instead of exploding or breaking into pieces, the colliding planes became stuck together in a piggyback fashion, one atop the other. I’m sure that the men in the top plane, at least were in shock at this strange turn of affairs. I say the top plane, because it is thought that the men in the bottom plane were incapacitated or dead. There was no communication with them. Once the men realized that they weren’t going to crash, they would have to figure out their next move.

Even more shocked than the crew of the B-17 were the German fighter pilots who suddenly saw the whole confusing, but disastrous event. People just don’t expect that a mid-air collision could result in two planes stuck together. For the German fighter pilots, however, the situation took on an even more bizarre tone, because they honestly thought that the US must have created some sort of new secret weapon!! For the men onboard, the situation was dire. I’m sure they expected the explosion to come at any moment, so some of the airmen bailed out. The pilot of the top bomber, Rojohn tried, but was unable to separate the aircraft. Strangely, he was able to control the flight of the ‘hybrid dual-bomber’ somehow, despite turning his own engines off. The lower plane’s engines were still running, because its propellers were still turning. There was no communication with the crew of the bottom plane, which is why it was assumed that they were either incapacitated or already dead.

In a valiant effort, Rojohn decided to try to land the planes, probably hoping that the other crew could be saved, and complicated by the fact that he and his co-pilot, Leek couldn’t get out anyway. At that point, he might as well do his best to save the two or more of them that he could. He coaxed the joined bombers to a relatively safe landing in Germany at Wilhemshaven. Unfortunately, the lower bomber slid out from under the top bomber upon landing and immediately exploded. While the crew of the lower bomber perished in the landing and subsequent explosion, most of the crew of Rojohn’s B-17 survived and was taken prisoner. While being held in the camps, the German interrogators, who were skeptical of the account of the incident given by 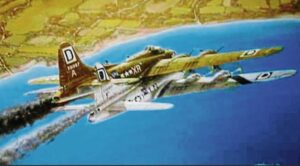 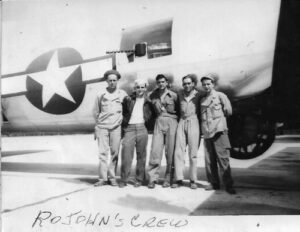 Rojohn, initially were of the opinion the flight represented a new American aerial design. I’m sure they later realized their error, but they must have also realized the resiliency of the B-17 Flying Fortress. Rojohn and his co-pilot, Leek, earned the Distinguished Flying Cross for their feat of aerial skill…a well-deserved award, if you ask me.