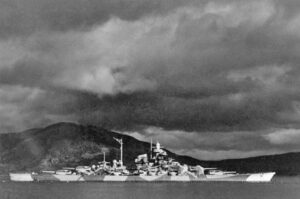 While many people have heard about the sinking of the German ship, The Bismarck, many may not have known that the Bismarck had a sister ship called the Tirpitz. Both ships were quite likely the same level of severity of threat to the war effort, but the Tirpitz somehow didn’t stand out as much…possibly because of the song that was written called “Sink the Bismarck” by Johnny Horton, and the fact that the Bismarck sank the Royal Navy battleship, HMS Hood, and that was the sinking than was the first and last straw before the Bismarck was taken down.

Nevertheless, the Tirpitz, commissioned in 1941, posed a grave threat to Allied shipping too. The Tirpitz was the German Navy’s mighty 42,900-ton battleship that carried a main armament of eight 15-inch guns. The ship saw limited action, however, spending most of its war career in Norwegian waters where it posed a constant danger to Allied convoys that were bound for Russia. Because the ship was in those waters, the Allies were forced to maintain a large fleet in northern waters to guard against the Tirpitz and repeated attempts were made by both the Royal Air Force and Royal Navy to sink the menacing ship. During the short life of the Bismarck, the battleship sank one ship…HMS Hood, and then the Royal Navy took the ship down. The Tirpitz was a menace a bit longer, but it never actually sank a ship. It took part in a number of battles, mostly shoot at other ships, but sinking none. Still, the possibility was always there that the Tirpitz could take out ships belonging to the Allies.

The Royal Air Force tried to take out the Tirpitz before it even set sail, by bombing it in January of 1941 while it 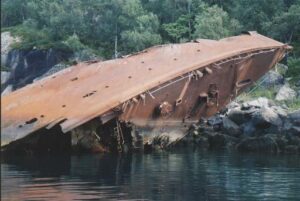 was being completed in a Wilhelmshaven dry dock. Somehow, the bombs actually “straddled” the battleship, missing it, and doing very little damage. Tirpitz was attacked again later in 1941 by twin engined bombers and in April 1942, when it was located and attacked by Halifaxes and Lancasters. Unfortunately, no bombs found their target that time either. The Royal Navy also attempted to take down the ship on a number of occasions with miniature submarines and carrier-based aircraft. Those attacks hit their mark, but had little effect, because Tirpitz had a double layer of armor plating. Finally, British inventor, Sir Barnes Wallis, built a special bomb for the job. He had previously developed the bouncing bomb used in the Dambusters Raid, so his inventions were trusted. In 1944 he devised the “Tallboy,” a 12,030-pound weapon capable of piercing the Tirpitz’s armor plating.

The ship was doomed, and on November 12, 1944, thirty Lancasters took off from Scotland flying in clear weather flew at 1,000 feet to avoid early detection by enemy radar prior to rendezvousing at a lake 100 miles southeast of Tromso. The attacking force then climbed to bombing height of between 12,000 and 16,000 feet. The Tirpitz was sighted from about 20 miles away. The crew called for air cover…frantically, but no cover came. They were sitting ducks when the Lancasters passed over the last mountain and the fjord with the Tirpitz came into view. When the bombers were about 13 miles away, the Tirpitz began firing their anti-aircraft guns. They 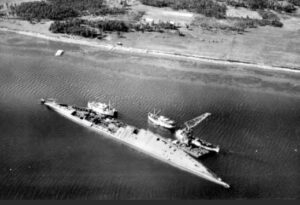 were joined by shore batteries and two flak ships. It was not enough. The Lancasters released their bombs were released and waited thirty long seconds for the results. The first bombs narrowly missed the target, but then a great yellow flash burst on the foredeck and the Tirpitz was seen to tremble as it was hit by at least two Tallboys. Smoke shot up to about 300 feet and the ship had started to list badly. Then a tremendous explosion was heard as the ammunition stores magazine went up. The ship rolled over to port and capsized. After 10 minutes only the hull visible from the air. Approximately 1000 of her crew were killed. The attacking aircraft, all with only minimal damaged returned safely to base. The Tirpitz was gone…finally.