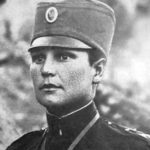 In 1913, Milunka Savic joined the Serbian army in her brother’s place, cutting her hair and donning men’s clothes. You might wonder why she would do such a thing, and why her brother didn’t go and do his duty. This story isn’t about her heroics in the face of her brother’s cowardice, but rather her heroics when her brother truly could not serve. In 1912, Milunka’s brother received call-up papers for mobilization for the First Balkan War, but at the time, he was quite ill with tuberculosis. Milunka could have just told the authorities that he was ill, and he would have been excused, but she knew that the war effort was important, so she chose to go in his place. She started her transformation by cutting her hair and started wearing men’s clothes, then she joined the Serbian army. She saw combat almost immediately, and while many women of that era would have turned tail and run, she did not. She received her first medal and was promoted to corporal in the Battle of Bregalnica. While she was engaged in battle, Milunka was wounded, and as she was being treated in the hospital, her true gender was discovered by some very surprised physicians. I suppose you could say that she hadn’t thought this part of the plan out very well, or maybe she just didn’t plan to be wounded!! Nevertheless, here she was, and she had a problem.

She could have been in a lot of trouble at this point, but she had proven to such a competent soldier, her commanding officers were hesitant to punish her. It was decided that they would send her to a nursing division, but Milunka informed them that she would serve her country only in combat. This had to be an amazing woman, who was far ahead of her time in the area of women in combat. While they could have insisted, I suppose they would have also lost not only a nurse, but a great soldier, so they relented, and she went back to her unit. Milunka went on to fight in three wars and earn seven medals, including the Croix de Guerre and the British medal of the Most Distinguished Order of Saint Michael. It is believed that she may in fact be the most-decorated female combatant not only in Serbia, but in the entire history of warfare. To me, Milunka Savic was not just a hero for her fighting efforts, but for stepping up when her brother could not. I’m sure he is quite proud of his sister.

She was demobilized in 1919, and turned down an offer to move to France, where she was eligible to collect a comfortable French army pension. Milunka found work as a postal worker in Belgrade. In 1923, she married Veljko Gligorijevic, whom she met in Mostar, and divorced immediately after the birth of their daughter Milena. She loved children and went on to adopt three other daughters. In the interwar period, Milunka was largely forgotten by the general public. Life was not easy for her. She worked several menial jobs up to 1927, after which she had steady employment as a cleaning lady in the State Mortgage Bank. Eight years later, she was promoted to cleaning the offices of the general manager…such menial labor for a hero. 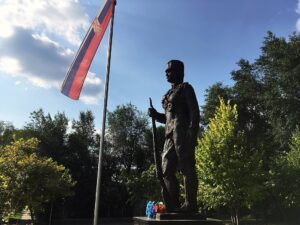 During the German occupation of Serbia in World War II, Milunka refused to attend a banquet organized by Milan Nedic, which was to be attended by German generals and officers. She was arrested and taken to Banjica concentration camp, where she was imprisoned for ten months. By the late 1950s, her daughter became ill, and before long she found herself living in poverty. In 1972, public pressure and a newspaper article highlighting her difficult housing and financial situation led to her finally receiving the recognition she deserved. She was given a small apartment by the Belgrade City Assembly. She died in Belgrade on October 5, 1973, at the age of 85, and was buried in Belgrade New Cemetery.