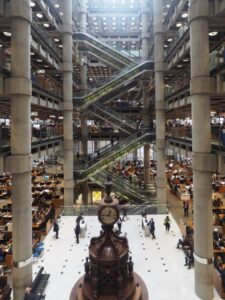 As an insurance agent, I have dealt with Lloyd’s of London many times. They were the company that could handle whatever needed to be handled, when no one else could. They were a no-nonsense company, and that always made me think of a traditional company…if not a stuffy old company filled with old men who almost look down on the people that end up needing insurance from them. Lloyd’s of London is an insurance and reinsurance market located in London, England. Unlike most of its competitors in the industry, it is not an insurance company. Lloyd’s is a corporate body governed by the Lloyd’s Act 1871 and subsequent Acts of Parliament. “Lloyd’s operates as a partially mutualized marketplace within which multiple financial backers, grouped in syndicates, come together to pool and spread risk.”

While Lloyd’s of London is a traditional company, the building that houses them is…a little strange. The Lloyd’s building, which is also known as the Inside-Out Building. It is located on the former site of East India House in Lime Street. That is in London’s main financial district, the City of London. The building is an example of radical Bowellism architecture in which the services for the building, such as ducts and elevators, are located on the exterior to maximize space in the interior. Whatever they were trying to accomplish, the result is a very strange building. The building is as unique inside as it is outside.

The building was completed in 1986, and in 2011, twenty-five years after its completion the building received Grade I Listing, which is “of exceptional interest and may also have been judged to be of significant national importance.” The Lloyd’s building is the youngest structure ever to obtain Grade I Listing. It is said by Historic England to be “universally recognized as one of the key buildings of the modern epoch.” However, its innovation

of having key service pipes and such routed outside the walls has led to very expensive maintenance costs due to their exposure to the elements. I suppose that makes sense, maybe more sense that the original structure of the building, which while interesting, may not be practical. In fact, Lloyd’s is actually considering a move to a more traditional building. That is almost sad, when you think about it.