In order to support a hurricane or typhoon, an area has to have one ingredient…warm ocean temperatures, generally above 82° F. The warm water sustains hurricanes and allows them to grow stronger. On the other hand, cooler sea surface temperatures will cause hurricanes to weaken, and in most cases, die out. The biggest difference between the East and West coasts of the United States are the sea surface temperatures. Because the Gulf Stream flows northwards along the East Coast, while sea surface temperatures along the West Coast are significantly cooler, the West Coast cannot usually sustain hurricanes. Of course, that doesn’t mean that it is impossible, as is shown in the 1962 Columbus Day Storm…also called the Big Blow and in Canada, Typhoon Freda.

The Columbus Day Storm was a Pacific Northwest windstorm that struck the West Coast of Canada and the Pacific Northwest coast of the United States on October 12, 1962. Starting out as a tropical disturbance over the Northwest Pacific on September 28th, the storm was the twenty-eighth tropical depression, the twenty-third tropical storm, and the eighteenth typhoon of the 1962 Pacific typhoon season. The system strengthened on October 3rd and became a tropical storm. At that time, it was given the name Freda, but later that day it became a typhoon as it moved northeastward. Before long the storm intensified, reaching its peak as a Category 3-equivalent typhoon on October 5th, with maximum 1-minute sustained winds of 115 mph and a minimum central pressure of 948 millibars. The storm maintained its intensity for another day, and then gradually weakened on October 6th. By October 9th, Freda had weakened into a tropical storm, and it looked 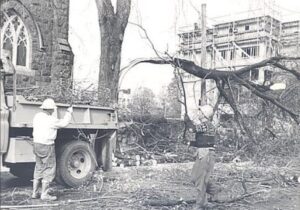 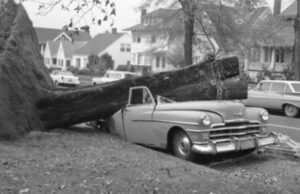 like the Pacific Northwest would dodge a bullet. Then Freda transitioned into an extratropical cyclone on October 10th. Freda turned eastward and accelerated across the North Pacific on October 11th, and finally made before striking the Pacific Northwest the next day. On October 13th, the cyclone made landfall on Washington and Vancouver Island, and then curved northwestward. After ripping through the west coast of the Washington and Canada, the system moved inland in Canada and weakened. By October 17th, it was absorbed by another developing storm to the south, and the event was over.

Nevertheless, the Columbus Day Storm of 1962 is considered to be the benchmark of extratropical windstorms to this day. As storm ranking goes, the Columbus Day Storm is listed as being among the most intense to strike the region since at least 1948, and quite likely since the January 9, 1880 “Great Gale” and snowstorm. With respect to wind velocity, the storm is also considered a contender for the title of the most powerful extratropical cyclone recorded in the United States in the 20th century. Even the March 1993 “Storm of the Century” and the “1991 Halloween Nor’easter” (“The Perfect Storm”) were no match. The system that drove the Columbus Day Storm brought strong winds to the Pacific Northwest and southwest Canada, was linked to 46 fatalities in the northwest and Northern California as a result of heavy rains and mudslides.

Normally, the storms that originate in the Pacific tend to weaken and die out as they reach the colder waters there. most don’t even recurve into the west coast after the leave the warmer gulf waters and head across Mexico. That is what made the Columbus Day storm so unusual for the area in which it took place.