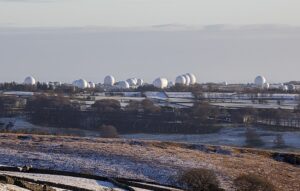 You can fly near it, walk close to some fences, or zoom in from a far hill, but you cannot enter Menwith Hill Royal Air Force Station for any reason. Not unless you are an ECHELON spies and the NSA, that is. The station was founded in 1954, when the British War Office purchased 550 acres and leased them to the United States. The Cold War, a strange war that “raged” from March 12, 1947, to December 26, 1991, was in full swing when Menwith Hill was established. At the time, the station was used for spying and intelligence-gathering. Now that the Cold War is over, no one knows what goes on there. In fact, concern over the goings on is so high that there have been a large number of protests leading to politicians calling for more transparency about what goes on at Menwith Hill Royal Air Force Station. Many people think that Menwith Hill Royal Air Force Station, which is by far the most secretive piece of land in all of the United Kingdom, needs to be more transparent. Nevertheless, to this day, no one knows for sure what goes on in this military installation. 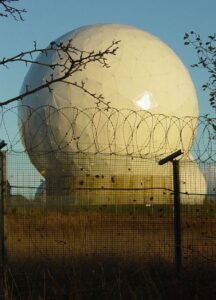 RAF Menwith Hill is owned by the Ministry of Defence (MoD), but made available to the US Department of Defense (DoD) under the NATO Status of Forces Agreement 1951 and other, undisclosed agreements between the US and British governments. The site acts as a ground station for a number of satellites operated by the US National Reconnaissance Office, on behalf of the NSA, with antennae contained in numerous distinctive white radomes, locally referred to as “the golf balls,” and is alleged to be an element of the ECHELON system. The radomes are really a big part of what gives the installation its air of mystery.

Military installations have existed all over the world for hundreds of years, but not all of them are as secretive as Menwith Hill. It’s likely that we will never be privy to the things that go on there, and that may be a source of contention for years to come. I don’t know how I feel about the secrecy in military installations. In some ways I understand the need, but with secrecy, can come corrupt and dark schemes, as we saw during the Holocaust. Much depends on the integrity of the country, and even more importantly the integrity of the people in charge of the activities that go on there. Even with a country that is trying to do good, there can be evil people both working there, and in charge 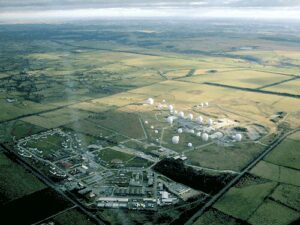 of operations, and when evil people are allowed to operate in secrecy, the only logical outcome is disaster.

RAF Menwith Hill is one of three main sites operated by the United States across the globe. It operates as a major satellite monitoring station and intelligence gathering location. The other two sites are located in America and Australia, having similar roles and working together with RAF Menwith Hill to develop knowledge around American, British, and Australian interests. The Australian site is known as the Joint Defence Facility Pine Gap. I wonder if operations at the other sites are as secret as they are at RAF Menwith Hill.