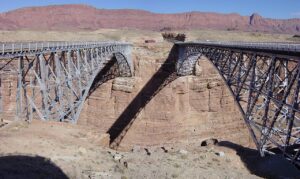 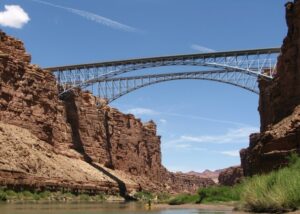 The Navajo Bridge is a pair of twin steel spandrel arch bridges that cross the Colorado River in the Grand Canyon National Park (near Lees Ferry) in northern Coconino County, Arizona. The first bridge was officially named the Grand Canyon Bridge when it was dedicated on June 14, 1929, but five years later in 1934, the state legislature changed the name to Navajo Bridge. When the first bridge was built, it was really too narrow to be used for the vehicular traffic of today and almost too narrow at the time it was built. That is really what sparked the need for a second bridge, and the newer of the two spans is well able to carry vehicular traffic on US Route 89A over Marble Canyon between Bitter Springs and Jacob Lake, allowing travel into a remote Arizona Strip region north of the Colorado River including the North Rim of Grand Canyon National Park. Sadly, during construction of the first bridge, a worker named Lafe McDaniel died after falling 467 feet to the Colorado River below. Initially, a safety netting was considered, but supervisors had rejected the idea, believing that it would catch on fire from falling hot rivets.

The dual bridges of Navajo Bridge are tied at ninth place among the highest bridges in the United States. Their heights are nearly identical with the original span at a height of 467 feet, and the second span at 470 feet. What really caught my eye was that if you are looking toward the red cliffs from beside the bridges, it looks as if they go straight into the rocks. They don’t, of course. It’s an optical illusion, but it is interesting, and quite pretty. When the second bridge was completed, and was wide enough to handle the modern-day traffic, the original Navajo Bridge was changed to allow only pedestrian and equestrian use, and also an interpretive center 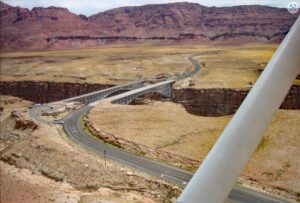 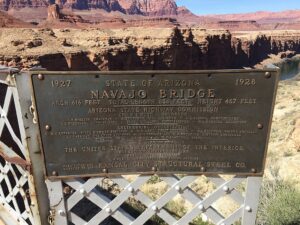 was constructed on the west side to showcase the historical nature of the bridge and early crossing of the Colorado River. In addition, the original bridge has been designated as a Historic Civil Engineering Landmark and was placed on the National Register of Historic Places on August 13, 1981. In 1996, California condors were reintroduced to the area and can sometimes be seen on and around Navajo Bridge, making it even more interesting to visit.